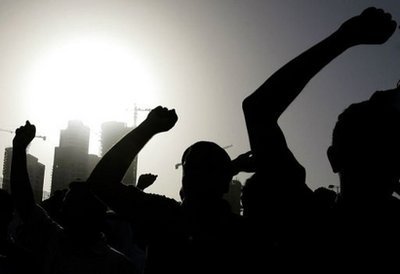 Bahrain's police fired tear gas and used sound bombs to disperse hundreds of demonstrators on Saturday in a Shiite village near the capital, witnesses said.

They said the incident took place at a road junction in Sanabis following the funeral of a 15-year-old youth.

He died earlier the same day in hospital of burns he had suffered during an attack Friday "by a group of saboteurs on a construction firm's warehouse," according to the interior ministry.

A Shiite-led uprising to demand democratic reforms in Sunni-ruled but Shiite-majority Bahrain was crushed in March 2011.

King Hamad in August this year ordered stiffer penalties for "terror acts," including a minimum 10-year jail term for an attempted bombing. If such attacks cause casualties, the sentence can be life imprisonment or death.

The authorities have also banned demonstrations in the capital Manama.