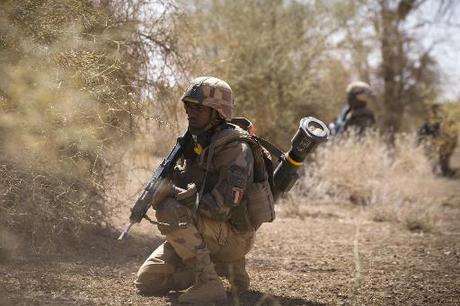 A suicide bomber staged a botched attack on foreign forces in northern Mali overnight Saturday, killing himself but causing no other casualties, Malian and French military officials said.

A senior Malian official described the bomber's target as a "French army position," but a French army spokesman said the attack was against a battalion of the U.N'.s peacekeeping mission for Mali, MINUSMA, and that only 24 French troops were present.

"The suicide bomber targeted a French army position in the town of Menaka," the Malian army official told Agence France Presse by telephone from northern Mali.

"The French troops detected his presence and in the rush, the man set off his (explosive) belt, killing himself but causing no other casualties," he said.

Colonel Gilles Jaron, spokesman for the French army joint staff in Paris, said that the target was in fact a battalion of between 500 and 700 troops from Niger taking part in MINUSMA, and that "only a support and liaison detachment of 24 French soldiers" was present.

The attack in Menaka, around 300 kilometers (190 miles) east of Gao, the largest city in northern Mali, was confirmed by the communications unit of the French military operation in Mali.

The Malian army official said at least two other would-be suicide bombers fled the scene after they were apparently ordered to take part in the attack.

A French military official in Mali said the suicide bomber "blew himself up at a distance from a French position in Menaka. We counted no (losses) on our side."

The attacker had been "detected in advance," he said, adding the bomber may have had accomplices who managed to escape.

A French-led offensive in January drove Islamist groups linked to al-Qaida out of the cities of northern Mali, including Gao, Kidal and Timbuktu, after they occupied them in the wake of a coup in the capital Bamako last year.

But the jihadists have continued to launch periodic strikes on the French, Malian and African peacekeeping forces.