Saqr Orders Arrest of 8 People in Connection to Tripoli Clashes 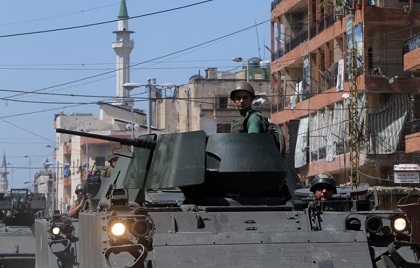 State Commissioner to the Military Court Judge Saqr Saqr ordered on Monday the arrest of eight people, including Hatem al-Janzarli, in connection to the clashes in the northern city of Tripoli, reported the National News Agency.

It said that he also requested investigating the identity of some 60 individuals in order to take the necessary legal measures against them.

On Sunday, the army carried out a raid in the inner markets of Tripoli where it arrested a number of individuals, including al-Janzarli, who is suspected of opening fire at the army.

A number of suspects were arrested in the raid and they have been identified as A.al-Ghoul, A.al-Niz, M.Ouloulou, and M.al-Homsi.

Tripoli has been rocked with the latest round of clashes between the rival neighborhoods of Bab al-Tabbaneh and Jabal Mohsen.

The Army Command later issued a statement on Sunday explaining that units had raided a number of areas occupied by Tripoli gunmen and snipers.

It arrested eight gunmen and confiscated a number of light weapons and ammunition, including a sniper rifle and military equipment.

Fighting linked to conflict in Syria frequently erupts between the rival neighborhoods, with residents of Bab al-Tabbaneh supporting Syrian rebels and residents of Jabal Mohsen backing the Syrian regime.

Don't forget PM. Mikati along with the Janzarli since he is funding him and many others.
the list must start this way:
1 nagib mikati
2 chadi mawlawi
3 hatem al janzarli .......

lol poor icecream is about to melt. Funny everytime you make a comment it has nothing to do with the article listed above.

I think it is funny:) @mowaten, please add me to iceman's aliases.

definitely, but that was old news.

it is such comments that disregard justice totally that are instigating strife and hatred.
this is what is about to start the deadliest sectarian civil war in Lebanon.
to say this ali eid is defending himself while he is wanted by our judiciary for the twin bombings, and accusing the ones that have been bombed as al Qaeda or salafis.....

you should change your name to "gehahaha" dude, you're so funny.
all day you cheer at your friends' "accomplishments" when they shoot innocent people just because they are alawites, and now you accuse Mystic of sectarianism? gehahahaha this is too much :)

Exactly. Eid should be thrown in jail. His non arrest is the trigger of round 19 of Tripoli clashes.
The problem is that he is protected by assad who gave strict instructions protecting him.

I wonder how they were able to arrest samaha and not eid... to what level can official Lebanon go against assad wishes??

both mowaten and mystic failed to reply to the substance of my comment avoiding it to just try to be funny :)
this shows who does not have arguments, and who is sectarian.
being bullies does not mean you are right, and the fact remains the same: no justice drives towards sectarian strife.

funniest comment ever... and how so did M14 sell the country? LOL