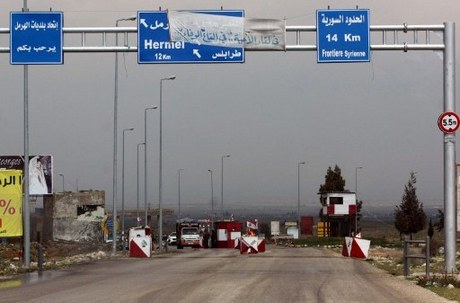 The army has closed several roads on the northern border with Syria to prevent the passage of cars, the state-run National News Agency reported on Monday.

"Army bulldozers have been working for the past three days to close all roads and passages that lead to Syria near the border towns of Arsal and al-Qaa,” the NNA detailed.

"The troops erected barricades at the crossings for this purpose.”

The same source explained that these measures were taken to prevent the passage of four-wheel and equipped drives, few days after rockets were seized at the eastern mountain belt.

On Friday, the army seized and detonated three 107-millimeter Grad rockets in the Bekaa's al-Qaa region.

The rockets were prepared to be launched towards the Hermel region.

man be careful, i hear they are sending the "boohoohoo" chorale to whine over this cruel and unjust treatment of takfiri suicide bombing cannibals.

not as important as yours i bet.

Border must be closed. especially around Arasal, the town of terrorists

What a hypocrite. All the troubles in Lebanon and you only see Arsal. Is Dahiyeh the town of freedom and democracy?

what did i say, here's the boohoohoo chorale.

the army should close all passages and shuld not allow any transfer of fighters in or out of Syria.
actually they should have done that long time ago, and now they should stop the Iranian terrorist militia from crossing over.

It is unfair for 2 reasons :

-dissociation applied only to sunnis, hezb is free to go and fight in Syria, using Lebanon as a transport/logistics hub

- by besieging Arsal, army is choosing Assad and Iran side and giving up the people of Syria.

oh they see them alright, the difference is HA has got their back, and filling the gaps when the army is short on men because they're spread so thin from north to south and east to west.
both are together keeping our borders safe, you may thank them.

By all means, provide a one way passage for all Hezbollah terrorists and their weapons though. They are going to die like the brave little terrorists they are.

Of course, Hezbollah leaders themselves do not go to Syria. They have no balls and only send their brainwashed youth...