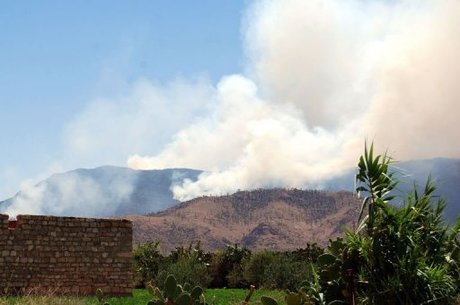 A landmine killed a Tunisian army officer on Monday in the Mount Chaambi border region, where security forces have for months been hunting al-Qaida linked militants, the defense ministry said.

Captain Youssef Dridi, a military engineer, died in the blast, which occurred at the end of an "operational mission" and which lightly injured another soldier, the official TAP news agency quoted the ministry spokesman as saying.

Since last December, the security forces have been tracking jihadists holed up in the remote Mount Chaambi region that straddles the Algerian border.

The area has been mined with homemade bombs, which are thought to have killed more than 15 soldiers and police so far this year, while a number of militants have also been killed by the Tunisian forces.

But the defense ministry has admitted it lacks the resources to comprehensively defeat the group.

Since the 2011 revolution that toppled Zine El Abidine Ben Ali and ignited the Arab Spring, Tunisia has been rocked by violence blamed on radical Islamist groups who had been suppressed under the former dictator, with the attacks multiplying in recent months.

The authorities blame Ansar al-Sharia, Tunisia's main Salafist movement, which they have branded a "terrorist organization" with ties to al-Qaida. They have also implicated the group in the killing of two opposition politicians this year.

The group has always denied resorting to violence.