Army Entrusted with Tripoli Security for 6 Months, Security Forces Put under Its Command 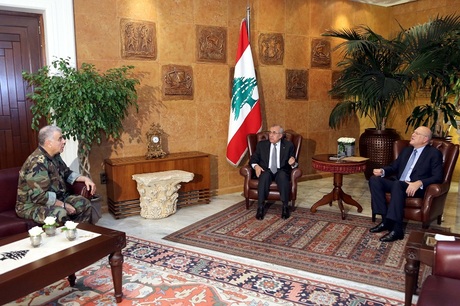 Caretaker Prime Minister Najib Miqati announced Monday evening that the army will be entrusted with Tripoli's security for six months and that all security agencies in the city will be put under its command.

“During the meeting he held at the presidential palace this afternoon with President Michel Suleiman and Army chief Gen. Jean Qahwaji, it was decided to task the Lebanese army with taking the necessary measures to preserve security in Tripoli for a period of six months and to place security forces under its command,” said a statement issued by Miqati's office.

It was also decided to “execute the judicial warrants that were issued and that will be issued,” according to the statement.

Earlier on Monday, LBCI television quoted Miqati as saying that Tripoli will be turned into a “military zone,” the thing that was swiftly denied by the premier on his Twitter page.

LBCI also quoted Miqati as saying that “the decisions of the security meeting are in line with Article 4 of the defense law.”

The army will become responsible for the security of the city and an extraordinary decision on the matter will be issued on Monday or Tuesday, he added, according to LBCI.

"The decision reached during the Baabda meeting involves decisive military operations by the army in Tripoli when needed," MTV reported.

"The Baabda security meeting stressed that jeopardizing civil peace is a 'red line' but the decision does not involve dealing with the issue in a way similar to what happened in Nahr al-Bared," it said.

"We will seek to reverse it and topple it politically," he said.

The ongoing round of clashes between the rival Tripoli neighborhoods of Bab al-Tabbaneh and Jabal Mohsen has left at least 10 people dead and 100 others wounded since Saturday.

Fighting linked to conflict in Syria frequently erupts between the rival districts, with residents of Bab al-Tabbaneh supporting Syrian rebels and residents of Jabal Mohsen backing the Syrian regime.

Calling urself beautifulmind but too stupid to understand the difference between KSA and saudi takfiris. It's like calling Sleiman a protestant...

any measures are welcome to bring peace on tripoli at the condition it applies to both camps....

There is no difference between KSA and the rest of the takfiri wahabis, stop lying guys you know its not true, oh yeah right, everyone opposing you guys are one of my accounts right? Hahaha

beautiful words from a beautiful mind ;)

Why would he? He is on their side against the real enemy AL Qaeda

Oh bombing 2 mosques and killing innocent people is fighting al Qaida? Or does it suit your agenda that every single person who died that day was al Qaida? Sick.

U just forgot el absi and co., hachem mekara and co. , fabricated abou addass... But all those doesnot count there is assirr i forgot...
In any case i'm glad the army is back to doing it's job, hope they will do it on both sides, maybe bring ali eid to justice to (the bombing of the 2mosques should not pass so smoothely or else the army might fond itself in a difficult situation, remember during the war the lebanese army was everywhere (liwa2 el sedess with bery, south lebanon army, jech lebnen el araby.... Keep it impartial that is our only hope....

ok.. let me use your argument in the hope that it might reach your brain wave... who said they were takfiri? oh i forgot... HA and thier paid stooges.

One of the attackers was from lebanon smarty.

Mystic you are one arrogant shia takfiri.

BM, takfiris and khawarijs exist for about 1400 years, centuries before KSA. Takfiris are arrested and sometimes beheaded if found guilty of terrorism. Don't forget BinLaden was stripped from his saudi citizenship in 2004.
The official doctrine of KSA is salafia which is different from takfir. If u're really interested to understand the difference use wiki and google.

Damn and i thought i was mowaten and FT, can you guys decide?

It is about time this step was taken, in this case a “military zone” is needed. They should clamp down hard on all armed thugs from both side. Hopefully it will more then just talk this time.

i'm sorry im not a farsi brainwashed Aoun played person as you my dear Mystic.
Do you have any documented proof of what you say??? any recordings of the Sheikhs calling for a jihad?
but I digress, let us assume what you say is true, that gives grounds for bombing them? and killing the innocent people who happen to be passing by? who happen to just be praying and not heeding the calls of jihad?
and now can we bomb Shia mosques because most of them call for joing the sectarian militia? because most of them justify sending Shia men to Syria..
your logic is lacking.. just as the man in your avatar.