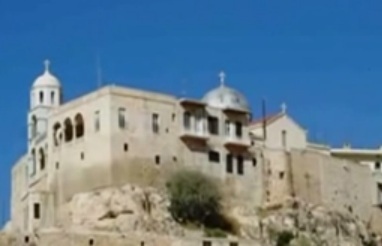 Rebels assaulted the town by rolling explosive-filled tires down the hills onto regime forces and were able to reach the city center after three days of intense fighting, with clashes still raging in the surrounding areas.

The picturesque town is considered a symbol of the ancient Christian presence in Syria, and its 5,000 pre-war residents are among the few in the world who still speak Aramaic, the language of Jesus Christ.

The fighting came as the regime has been battling to gain control of a string of nearby towns and villages along the strategic Damascus-Homs highway north of the capital.

The Observatory, a Britain-based monitoring group that relies on activists and other sources on the ground, said several groups, including al-Nusra Front, an al-Qaida affiliate, had taken part in the capture of the town.

The rebels abducted 12 Syrian and Lebanese Orthodox nuns from their convent after moving into the town, Vatican Radio reported, citing Mario Zenari, the nuncio (ambassador) of the Holy See in Syria.

Syrian state news agency SANA had earlier said the rebels had entered the Orthodox Mar Takla convent, in the middle of the city, which had previously been controlled by the army.

1- they didn't take yet all the town
2- from what i heard, FSA would have helped to evacuate the nuns under alawite artillery
3- https://www.youtube.com/watch?v=QJ1Z6UNs3iA

you should be ashamed of yourself

Its one thing to be pro M14, but to really believe these guys aren't doing these things to Christians is why I have disassociated myself with LF. There are too many that refuse to admit the FSA through their alliance with Al Nusra/Qaeda, that these extremists are killing Christians because they hate their religion. I understand we have some Sunni moderates in Lebanon, but these takfiri are rampant in Syria. They are Syrians and North Africans....

Take a beer benzona, would do you some good. Stop being a fundamentalist

I'm having one as we type. I almost died of a carbon monoxide intoxication this evening... What a sweet death it would have been in comparison to what bachar's chabiha are doing to the Free Syrians.

@thefact You see now why this can't be called a Revolution? This is a call for Jihad against ordinary human beings! If they want to fight Assad so bad why don't they go fight him in Damascus? All they want to do is spread fear and terror among the ordinary civilian people of Syria.

I hope that day will be soon.

A U.N. commission of inquiry into human rights violations in Syria "has produced massive evidence ... (of) very serious crimes, war crimes, crimes against humanity," she said, adding that "the evidence indicates responsibility at the highest level of government, including the head of state."

that means that those supporting the syrian regime are no better than these terrorists as both sides commit crimes against humanity and should stop blaming the other camp while they support a camp that does the same ! LOL

and that is the reason why the president has called for disassociation with this conflict in order not to fall into their trap!

the point is that i do not support anyone... both sides are terrorists...

well if you read carefully i said both sides are terrorists meaning that if those terrorists carry out crimes against humanity then nothing can defend them...

i am not M14...
and also i haven't seen M14 defending nusra or elqaeda, have you? but M8 defending bashar who committed crimes against humanity and war crimes yes!

and i won't defend FSA if they kill innocent people or anyone on the grounds of religion!

Ana, any weak and vulnerable person can be easily manipulated by any sect... It happens everyday. They are endcotrined and abused... For personal benefits who are always related to power hunger.

"To the Christians of Lebanon." This is not something that is happening far away, or something we can't do anything about, this is happening right next door! People are getting killed just for believing christ, statues of virgin mary are getting smashed, for christ sake, leave Geagea and all the Saudi supporters before it is too late for you.

as long as religion is mixed with politics then it is no longer religion but fanatism...
christians in their history committed genocides, killing , raping, torturing because at the time it was also politics, now some muslims do the same (both chia and sunni!) so nothing good can come out of it...

the last century has seen the fall of strong ideologies such as communism , no strong ideology has risen yet to replace it so some extremists fill the void by spreading islamic fanatism because some people need to cling to something: you now have elqaeda and hezbollah who are thriving on this need....

who would defend them in that case? not me anyway....

Funniest thing of all is even cannibals got supporters nowadays.

u don't have supporters so u need to open multiple accounts and speak to urself. Quelle tristesse... Are u based in Damascus or Tehran ?
I believe more and more that u're part of that army of trolls can the syrian electronic army. Loads of them on fb, twitter, ect...

lol cedre, i could say the same about internet jihad all over the place. You are one of those i guess

I'm not debating with people that have no relation to Lebanon at all, you are just here for the drama which is silly.

Mate wth are you talking about attacking for? We are having a simple conversation and you talk about debate and attack, just act normal i have no problem with you. Btw everybody wants a piece of Lebanon, and everybody got something to loose in both Lebanon and Syria, so it is naive to think that it can be undependent at this present time.

Switzerland is europe and that is about 60 years ago now, you can't resemble a middle east country with an european one, that is just unrealistic.

hehe habibi rellikifalas<3, btw cedre we both know that it is bs what you are saying everyone opposing you are either Iran thug or Hizb shaitan supporter, just like i'm calling you Qaeda supporter, we can continue all day long.

Btw, Yes i support Bashar al assad and i support Hezbollah & Iran i have no secrets there ;) I'm atleast being hornest so now please, tell me you support Al Qaeda so u are hornest too Cedre

Everyone opposing you is either me or FT right? It's not the first time i heard that lol

nope, both mowaten and FT has been here on Narhanet long before i knew it existed lol.

btw dear cedre, i will start acting different and give you different expressions if you start changing ;)

whatever moustique, u know u're just BS.
Get a life and stop supporting a tyrant killing kids and women...

and i support them free of charge.

not free, u're benefiting from shia-alawite ruling in the Levant, and u know it's coming to an end.

nope, i do it for free mate. I think that their money should be spend on more needful things :)

You call that documentation? Ofcourse the nuns will say anything to protect the children from getting beheaded!

The only tyrants are al Qaeda cedre, just shame you can't admit that they take the Syrians hostage, thats why so many Syrian soldiers died.

@rellikifalas you wont be able to change his mind, cedre is one of those brainwashed Saudi cheerleaders that think everything the Al Qaeda are doing in Syria are Gods work, including beheadings of innocent civilians.

ou hayda bas cigarettes and already they yell Allahu Akbar.. Everything is haram in their eyes, no life is this what you call freedom Cedre? Is this really what you want for Syria and probaly Lebanon too?

Allahu Akbar Sharia for us all..

@actionman the Civil war was a horrible moment for us all, i grew up with the horrors of that war like most people here, and i will never forget it, but why do you blame Syria for everything? Don't you remember Israel was here too? Everybody was killing each other and Syria was even helping archieving stability. You had your so called Cedar revolution, are you gonna hate Syrians forever? Forget the past and think about the future.

Islam has been tarnished. It is time for an overhaul to salvage whatever credibility is left.

FSA-Al Qaeda are Salafists, not Muslims.

The christians of syria are boneless. They have no cause. They count for about 20%. That will be about 3 million. They need to arm themselves and defend their towns. We did the same thing in lebanon. They are going to be slaughtered if they don't do what the christians of lebanon did. Yes we paid more than 15,000 martyrs b ut we defended our existence. They need Syrian Forces the same way lebanon has the Lebanese Forces. I think they can find a Bachir or Hakim among them

The FSA-Al Qaeda terrorists can try but they will not succeed in importing their Salafist terrorist ideology into Syria.

What kind of Salafist calls himself Tony Farris?

Cowards that they can only strike out at nuns and orphans.
My sincerest unChristian prayer is that when this animal trash is cleaned out of Syria by the Armed Forces of Syria that they will instead of returning to their home countries go straight for KSA, Turkey, the Gulf and any other countries that supported these mercenaries to reap the same destruction on those countries and bring them to their knees.

jajaja that is indeed rotfl

nice metaphor.... especially when it's more like a morgue (:

lol and i love when people like you keep crying, when i mention it primesuspect.

@mystic
God bless the woom that carried and delivered you!

Haha Tony, remember to tell your priest that you are supporting the killing of Christians, release your sins dude. Goodnight catch you on the other side ;)

whenever in doubt hit the Christians!
Dear muslim world (most of not not all)you pose danger amongst yourselves and Christians have nothing to do with it and they don't carry arms! resolve your problems between Saudi Arabia and Iran coz the problem is inter-muslim, and please get off the Christians case coz your ignorance/resentness/stupidity is killing everything around you and soon enough it will kill you.

Lol ok, here is another proof that Naharnet is M14 loyalists, they just deleted all my comments, i'm not gonna answer you guys anymore because i know everything i say will be deleted. Good riddance Naharnet keep up the good work..