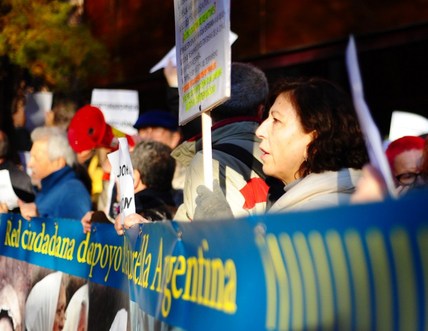 Two Spanish ex-policemen refused on Thursday to be extradited to Argentina to stand trial for allegedly torturing prisoners during the Franco dictatorship, a court said.

Dozens of angry supporters of the victims demonstrated near the courthouse in Madrid as Juan Antonio Gonzalez Pachecho, 67 -- known as Billy the Kid -- and Jesus Munecas Aguilar, 78, arrived for their hearing.

A judge in Argentina has issued an international arrest warrant for them under the doctrine of universal jurisdiction, which allows courts to try certain cases of human rights abuses committed in other countries.

The Argentine federal judge, Maria Servini de Cubria, is leading a broader judicial investigation launched in 2010 which includes allegations of "genocide and crimes against humanity" during Spain's 1936-1938 civil war and the ensuing dictatorship.

Gonzalez and Munecas face charges of torturing prisoners detained between 1971 and 1975, the year the dictatorship ended with the death of General Francisco Franco.

A written ruling released by the court after Thursday's hearing said that the torture charges are punishable in Argentina by up to 25 years in jail.

A court official who requested anonymity said both suspects refused to be extradited.

The judge must now rule in a future hearing on whether to extradite them forcibly. The court confiscated their passports and ordered them to report to the court each week, the official said.

The two men left court after the hearing, wearing dark sunglasses and with their faces partly covered by scarves.

Victims complain that the Spanish state has never officially acknowledged atrocities during the civil war and dictatorship. The lawsuit in Argentina, they say, may be their last chance to get justice.

"Truth, justice, compensation. No forgiving nor forgetting," chanted the demonstrators on Thursday.

Previous suits by families of people killed during the war and under Franco have been overturned under a 1977 amnesty law passed by the leaders tasked with unifying Spain after the dictator's death.

Spain's conservative government last week approved the extradition process for Gonzalez and Munecas, leaving their fate in the hands of the courts.

Gonzalez was known as Billy the Kid "because he used to do tricks with his pistol, as if he were a cowboy, and because he was very young," one of the alleged victims in the case, Felisa Echegoyen, told reporters in September.