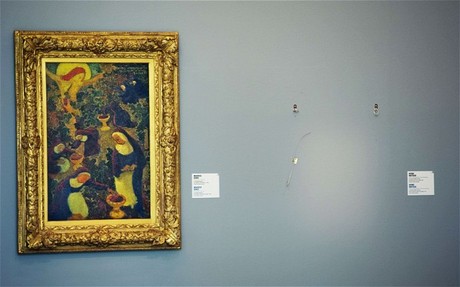 A Romanian man accused of stealing seven masterpieces from a Dutch museum was arrested in Britain after months on the run, Romania's Interior Ministry said Friday.

"Following an exchange of information between Interpol Romania and Interpol Manchester, one of the suspects accused of the theft of several paintings in Rotterdam was arrested in Britain," the ministry said in a statement.

According to the Kent police in Britain, Adrian Procop, 21, was arrested at the Eurotunnel Folkestone outbound terminal.

"He was charged with possessing false identification papers with intent and remanded to Westminster Magistrates Court," the police said in a statement sent to Agence France Presse.

Procop is accused of stealing masterpieces by Picasso, Monet and Gauguin in an October 2012 heist at the Kunsthal museum in Rotterdam.

"British judicial authorities have now to decide on his transfer to Romania," the Romanian ministry added.

"His arrest is good news," a spokeswoman at the Kunsthal museum told AFP.

According to Romanian prosecutors, Procop entered the Kunsthal museum at night with a friend, Radu Dogaru, and stole artworks worth 18 million euros ($24 million).

Last week, Dogaru was sentenced to nearly seven years in jail by a Bucharest court but the fate of the paintings remains a mystery.

The artworks are feared to have been destroyed after Dogaru's mother, who is also facing trial, said she torched them in her stove in the sleepy village of Carcaliu in eastern Romania. She later retracted her statement.