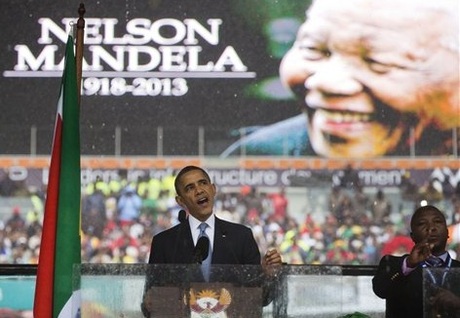 South Africa's deaf community on Wednesday accused the sign language interpreter at Nelson Mandela's memorial of being a fake, who had merely flapped his arms around during speeches.

"He wasn't even doing anything, There was not one sign there. Nothing. He was literally flapping his arms around."

The interpreter, who translated U.S. President Barack Obama's speech, looked as if he was "trying to swat a few flies away from his face and his head".

"The deaf community in South Africa are completely outraged and nobody knows who he is," said Loening.

"We can't find a name or anything. The organisations who have accredited interpreters do not know him at all."

The government organizers of the event, as well as broadcaster SABC could not immediately be contacted.

Attended by nearly 100 sitting and former heads of state, the speeches at Mandela's memorial on Tuesday were supposed to be interpreted into sign language for deaf viewers.

Delphin Hlungwane, a spokesperson for the Deaf Federation of South Africa, said the man picked for the job was "just gesturing in the air".

"He didn't interpret at all, he had zero percent accuracy," he said.

"International people were watching it as well and they all said he was not using any kind of sign language. They all said they don't understand him," said Hlungwane.

Loening said her organisation was getting mails from around the world "wondering what on earth this man was doing there".

"It's a real embarrassment. It's complete disrespect for the deaf community and for what Nelson Mandela stood for and the support which he gave toward he deaf community."

The government communications office said a statement would be put out shortly.

The country's public broadcaster, which provided the feed of the event, could not be immediately reached.