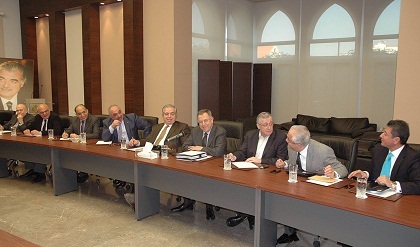 Al-Mustaqbal parliamentary bloc on Tuesday launched another verbal attack on Hizbullah's "militia," stating that the party and extremist groups are “two sides of the same coin.”

"The weapons of the resistance were formerly aimed at Israel but have now become positioned and used inside the country,” the MPs said in a released statement after their weekly meeting at the Center House.

Hizbullah's arms have thus become those of a militia, they added.

Al-Mustaqbal bloc elaborated: “Hizbullah's arms aim at changing the political system in Lebanon but they no longer enjoy Lebanese consensus. The party's call for agreeing on a new political formula in the country is no longer viable after it took the unilateral decision to launch a war against the Syrian people in 2012.”

“By taking this decision, Hizbullah has abandoned all national pacts and accords, including the Baabda Declaration.”

Again, al-Mustaqbal MPs called on Hizbullah to withdraw its forces from the neighboring country.

“The life in Lebanon will not go back to normal unless Hizbullah goes back to playing its national role only,” they said.

“Hizbullah's fighting in Syria, which was a regional decision, has dragged the Lebanese into a confrontation with Syrians,” they added.

“The party is trying to give the international community the impression that it is fighting terrorism but this attempt has been exposed. Hizbullah and extremist groups are two sides of the same coin.”

They also urged them “not to surrender to Hizbullah's blackmailing.”

Commenting on the deadly clashes between the residents on the Souwairi town in West Bekaa, they stated that it is “unacceptable and a shame that that social relations transform into armed disputes.”

The MPs urged security forces to enter the town and restore coexistence.

Clashes between the Shouman and Jinbeen families in the town left four people dead on Sunday.

Hizbos are the biggest takfiris in Lebanon...

Hezbollahis are takfiris who succeeded. (to take over the country's institution)

Any takfiri group who takes over a country's institutions becomes with time more pragmatic and more reasonable, compared to, for example, fath el islam. But that doesnt make them less a milicia who is bullying the whole countrh.

takfiris salughter people who are not of the same religion. get a grip of reality man you're just talking BS

they should pay me a copyright as i have always been saying the same thing before! LOL

"stating that the party and extremist groups are “two sides of the same coin.”

yes they are... they are saying that hezbollah and takfiris are both the same thing...

hizbushaitan have been takfiris since day one:
way back, around end of the 80s, early 90s during one of the fighting that occurred then between amal/hizbushaitan on one side and all the others in what was west Beirut then, amal/hizbushaitan were shouting:
بدنا نقولها على المكشوف سني ما بدنا نشوف.
so since then it was clear they were sectarian extremists takfiris.

thank GOD, he forgot :)
Merry Christmas to all

" life in lebanon not go back to normal until HA withdraws their milicia from syria."

I dont agree that they fight in syria. But I agree even less of the obstructionism of Mustakbal. Let HA fight it out in syria. Why is mustakbal putting syria before lebanon? Lebanon had a civil war and nobody stopped chosing governments because of us. why do we need to do so for syria?

it is not about turning it into a sunni/shii conflict but rather all about oil....

I find it funny that you complain about KSA human rights abuses but ignore the fact that 100,000 are dead so far in Syria because Bashar did not want to have elections. Ignoring what suits you.

Do you guys even think that the decision to withdraw back all hizb forces from syria still lies with Hassan? It is Not his Decision anymore, and will never be his decision again, this is simply undeniable.

yes they are, yet their terror is different... they have the entire control of half lebanon, they decide of the fate of the country, the gvt cannot do anything if it displeases hezbollah.... if that is not terrorism to impose their will on an entire country then what is it?

well easy to get the votes of people you terrify... like all dictators that get 99% of votes... very easy to get a majority under a gun put under your throat....

bigjohn we are not allowed to run candidates in any Shia areas...the only people allowed to run in Shia areas are Hezb, Amal, SSNP and Ba'ath. This means that half the country is not free, and does not have free elections.

go look at what happens when non-Hezb Shia try to run on M14/independent tickets in the South.

because the simple reason is that hezbollah as you say is a lebanese party whereas you are comparing it with a country...
do not mix up things and compare what is comparable...
besides they say that the takfiris and hezbis are the same thing LOL!
you are the perfect example of a syllogism... LOL

stick to what he says... isn't that what you always say? so he is not comparing countries but parties and groups... is that too limited for you?

so stick to the comparison instead of deflecting to twist what he says for your own sake....

May it bring peace and to all.

in bahrein people DO NOT want to overthrow the regime but to get the same rights... said a shia bahreini to me... you know better than him i guess?

and may i return the question to you: in bahrein people can rebel but not in syria? LOL

well seems like in syria where you have thousands of hezbi fighters along with iranian soldiers to back a regime that no one wants anymore! LOL

mikealam, this experiment would not last very long since soon the M8'ers would be crawling over to our side to get jobs, health care and education. and then in a couple of years the ingrates would pick up arms against us like they did before.

We have no control over random takfiri jihadists. Hezbollah, however, is an organized Lebanese political party, which has signed an accord that agreed to insulate Lebanon from the Syrian conflict.