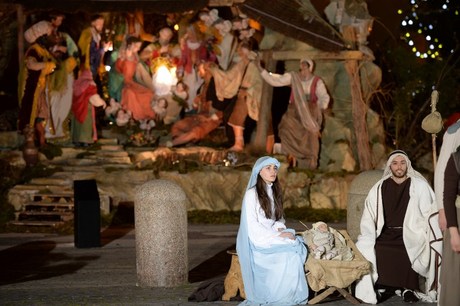 Pope Francis on Tuesday prepared to celebrate his first Christmas as pontiff with a mass in St Peter's Basilica as a giant traditional Nativity scene named in his honor was unveiled on St Peter's Square.

The Nativity scene made by Naples artisan Antonio Cantone this year is entitled "Francis 1223 -- Francis 2013" -- a reference to St Francis of Assisi, who inspired the pope's choice of name when he was elected.

The saint is commonly credited with being behind the first representation of the Nativity, staged with live actors as is still done in many parts of the world.

Cantone told Agence France Presse ahead of the ceremony that he had wanted to build a Nativity to reflect the pope's humble style, giving more prominence to ordinary people dressed in simple clothes in the traditional scene of the birth of Jesus.

"I have based the scene on the message of Pope Francis," Cantone said in an interview in his workshop in the bustling center of Naples earlier this month.

"The first to arrive when Jesus was born were ordinary people, that is the core of the message I wanted."

Elaborate Nativity scenes became popular in Naples churches in the 18th century to make religious teachings more widely understandable by including snapshots of daily life that people could relate to.

The custom was then adopted by the aristocracy and spread to ordinary people, becoming a yearly and much-loved tradition for millions of Italians.

The most traditional statuettes are painstakingly handcrafted out of terracotta, given glass eyes and painted -- each one a unique work of folk art.