Report: Suleiman Will Not End His Term without Forming New Govt. 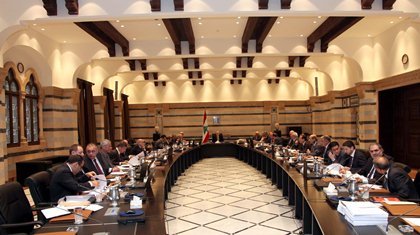 President Michel Suleiman is determined to form a new government before the end of his term in May 2014, reported As Safir newspaper on Wednesday.

Sources close to the president revealed that he had informed all political powers that he will not end his term before the formation of a new cabinet.

In addition, he said that he “will not end his term with a caretaker government viewed by some as being one-sided.”

To that end, he will devise with Prime Minister-designate Tammam Salam a plan to make all political powers assume their responsibilities in order to avert vacuum in Lebanon, “especially since the president decided to take the decision not extend his term.”

Meanwhile, Suleiman's sources revealed that Salam had held talks with the president on a certain cabinet lineup.

The president had however requested that he not disclose the lineup before a month.

Sources close to Salam told As Safir that he is studying the names of over 50 candidates, of all sects and political affiliations, who could be chosen in the new government.

No time has been set to announce the lineup, but it will likely be revealed before March.

Since his appointment to form a cabinet in April, Salam has been seeking the formation of a 24-member cabinet in which the March 8, March 14 and centrists camps would each get eight ministers.

The conditions and counter-conditions by the rival camps has however thwarted the formation of the cabinet.

he said that he “will not end his term with a caretaker government viewed by some as being one-sided.”

but President Lahoud left the Presidential Palace, while there was a one sided Government, that was not recognised by the 8 march. And Sanioura ruled for 6 months without any check, as powerful as a roman emperor. Nowhere in the constitution is written that the caretaking is not compatible with the interim of the Presidency. He should let the Constitution to be applied, as simple as that. But Sleiman needs to mess up the country, in line with the instructions received from the Khalij. Big cheque is on the way.

All things must come to an end on earth mr president.

any criticism of the regime will be met with harsh bunishment - but its ok because the regime will have 99% subbort of the bobulation just like bresident bashar al assad in syria.

Shia are the largest sect, however they do not form a majority. Even if they did, that does not give them the right to step on everyone else's rights. That isn't what "democracy" means. Protection of minorities is a staple of every functional democracy. Can we trust the future Shia majority to rule fairly and not repress Sunnis and Christians as is seen in Iran? I don't think we can rely on that. Partition please.

shia are not the largest secte: they represent less than sunnis :) and that is according to the official figures of the ministry of interior.

shia represent less than sunnis according to the official records of the interior ministry :)
stop believeing what lies your turbaned man tell you :)
there are official recoeds you know :)
so you are not the majority :)