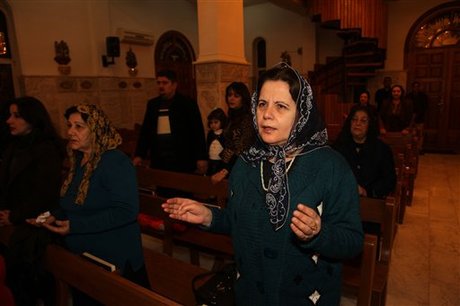 Attacks, including bombs that exploded in a market near a church in Baghdad, killed at least 44 people across Iraq on Wednesday, officials said.

The bloodletting comes as Iraq suffers its worst violence since 2008, when it was just emerging from a brutal period of sectarian killings.

Militants frequently attack places where crowds gather, including markets, cafes and mosques, in an effort to cause maximum casualties.

Security officials had initially said that a car bomb targeted the St. John church in Baghdad in addition to the market blasts, but Maan, along with a priest from the area and the Chaldean patriarch, all later denied this.

"The attack was against a... market and not a church," Maan said, while adding that "the targeted area is a mix of Muslims and Christians."

Archdeacon Temathius Esha, an Assyrian priest in Dura, and Chaldean Patriarch Louis Sako both also insisted that the church was not the target.

The U.S. embassy in Baghdad, however, issued a statement condemning attacks in Dura "that targeted Christians celebrating Christmas."

North of Baghdad, a bomb exploded under the bleachers at a football pitch, killing four people, among them two police, and wounding 11.

But although the government has made some concessions aimed at placating Sunni Arabs, including freeing prisoners and raising the salaries of Sunni anti-al-Qaida fighters, underlying issues remain unaddressed.

The bloody 33-month civil war in Syria, which has bolstered extremist groups, has also played a role in the intensifying violence, with the al-Qaida-linked Islamic State of Iraq and the Levant carrying out attacks on both sides of the border.

Defense ministry spokesman Mohammed al-Askari told AFP that aerial photographs and other information pointed to "the arrival of weapons and advanced equipment from Syria to the desert of western Anbar and the border of Nineveh province," referring to Sunni-majority areas bordering Syria.

This has encouraged al-Qaida-linked militants to "revive some of their camps that were eliminated by security forces in 2008 and 2009," Askari said, adding that aerial photos showed 11 militant camps near the border with Syria.

Iraqi security forces have launched an operation against militants dubbed "Avenge the Leader Mohammed," named for a divisional commander who was killed during a raid targeting militants.

The defense ministry said in an online statement issued Wednesday that security forces had killed 11 militants in a three-day period, and captured weapons and equipment.

But military operations launched earlier this year aimed at combating the relentless violence appear to have done little to curb the daily attacks.

It took just the first eight days of this month for the death toll to exceed 144 -- the number of people killed in all of December last year.

And more than 6,700 people have been killed in Iraq since the beginning of 2013, according to AFP figures based on security and medical sources.

sons of saudia arabia wish all christians in the world a very blood christmas...

I'm sure if this was a mosque bombing they would have found the perpetrators already. Because it's a church, I'm sure the security forces will work hard to not find the people responsible. Dirty animals. May the dead be in heaven.

theres a saudi al qaida member giving thumbs down to everyone. hopefully justice comes against the house of saud for its crimes and support of al qaida terrorists.

wonder who voted you down

It is not because M14 does not support the Assad regime, Iran or HA that means M14 are supporting the Takfiris.

True words guys, this is the worst act of crime to be comitted.

Wait in a few more years, and this will happen in Lebanon, i hope the Christians backing Geagea will open their eyes soon and leave that maniac.

Of course not Mystic. Geagea and crew are all blinded by the Harrir/Saudi funding.

Evil..Very very evil Islam....Max the souls of those xtians Rest in everlasting peace.

Al nusra, Iraq and Syria Islamic state (ISIS) and the rest of the suadi funded and supported Syrian rebels want an Islamic califite. How can that occur with significant Christian and other non Sunni populations? The aim is to rid the middle east and the levant of any significant Christian populations. Hence the attack on maalula and other christain villages in Syria.

Any association with these fanatical extremist, is tantamount to the destruction of any christain presence in the middle east!

What this article fails to highlight is that the second bomb detonated outside a Baghdad church after midnight mass, killing 15 worshipers as they left the church!

"There is a systematic attack on the Christian community in Syria and hundreds of thousands of Christians were displaced. Both sides are using the minority, Christians, as a political card, which is appalling from both sides. And we are losing, whoever wins at the end."

so not only the fanatics are responsible in syria but the regime as well according to reverend Nadim Nassar, an Anglican priest from Syria...
http://rt.com/op-edge/attacks-on-syrian-christians-761/

Ask the 16 Lebanese and Syrian nuns who were kidnapped from the mar taekla monestry in maalula if this comment in 2012 is reality? Ask the 2 bishops from Aleppo that have been kidnapped for over 9 months by al nusra if this is the reality on the ground. Ask the deacon/driver of the bishops and his family, was shot in the head fduring the kidnaping if this is correct. Ask the people of maalula who fled during the Islamist invasion, if the rebels that were beheading Christians who refused to convert and declared the end of crusader occupation, if they think the regime is responsible! Ask the head of the Anglican church... The archbishop of Canterbury, who today described the fate of the Christians in the middle east and the fact that christains are being targeted by al Quiada linked and supported Syrian rebels and Iraqi extremists!

well if you know better than this syrian reverend living in syria talking about christians in syria while living in australia! ... waw! you really believe you are a tough guy don't you!
maybe because what he says goes against your way to see things in syria? LOL

If and when there is a need for protection for the Christians, I advise that "offense is the best defense". Those who want to hurt Christians, are few and do not represent the mindset of true "Islam". Nor, in my opinion, are true Muslims.