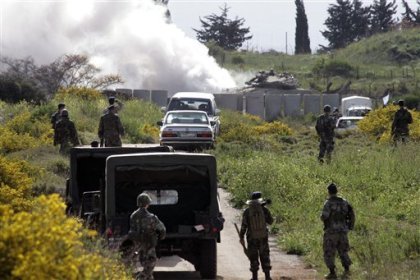 Israeli forces on Monday sent a sniffer dog into a border area disputed by Lebanon, one day after rockets fired from the South drew retaliatory Israeli shelling.

“An Israeli force backed by a troop carrier and a military jeep on Monday opened a metallic gate in the al-Thugra area, which lies on the border opposite the entrance of the town of Adaisseh, sending a sniffer dog into a disputed area,” Lebanon's National News Agency reported.

The dog advanced 30 meters and scoured the area for some time, the agency added.

The Lebanese army and U.N. peacekeepers went on alert as a precaution, it said.

On Sunday, the Israeli army fired around 32 artillery shells into the Lebanese border area of al-Khraybeh, after unknown individuals launched two rockets into northern Israel from southern Lebanon.

The Lebanese Army went on alert after a dog entered a "disputed" zone, but didn't when rockets were fired across the border into Israel.
What does that say?

Too many incidents are happening at the border! Something is gonna give

Yes, the hebrews r gonna rescue their shia partners because at this rate, they'll be totally marginalized by the end of January.

Of all the dumb excuses/stories you come up with, the best one is how Hezz and Israel are working side-by-side.
What a lovely fairy tale.
You should write a series children books.

cedre,
Why bother with evidence, why bother them with facts, their minds are already made up. You show them the evidence it falls on blind eyes. You make them hear the evidence and it falls on deaf ears. In their eyes, both Tufayli and Ali Al Amine are bought by Wahabis.
I enjoyed watching the videos and heard what I already know.

ft not friends, objective allies, revise ur geopolitics basics.
U remember yalta and then the cold war ?
Btw do u know that most of those jets were the mig21s u want us to get ?

Sure it is a play and they are willing to sacrifice a little of this and little of that for the greater benefit of gaining Power and wealth. Israel could have demolished HA's strongholds of Nabateyye and Baalbeck, instead they chose to demolish the infrastructure of Lebanon.

I wish you would defend your fellow Lebanese as much as you do your fellow Syrians!!
Exactly why we will never tolerate one another. Arab Jarab!!!

I really appreciate this post. I've been looking all over for this! Thank goodness I found it on Bing. You've made my day! Thanks again! fkgcbdcgggke