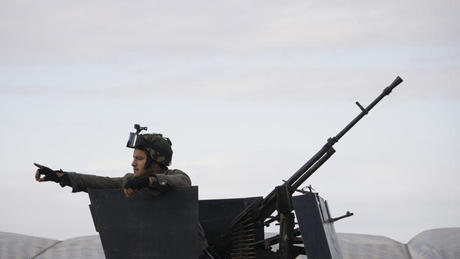 Deadly clashes broke out Monday as security forces tore down the sprawling protest camp near the city of Ramadi, west of Baghdad, and sporadic fighting continued on Tuesday, leaving a total of at least 14 people dead.

Monday's removal of the camp near the Anbar provincial capital was a victory of sorts for Maliki, who had long wanted it gone as, according to him, it was being used as a headquarters by Al-Qaida.

But while the camp's closure removed a physical sign of deep-seated grievances among Sunni Arabs, it leaves underlying issues unaddressed and is likely to inflame already-widespread anger among the minority community.

In a move seemingly aimed at calming tensions, Maliki on Tuesday announced that the army would leave cities in Anbar, a demand made by MPs who submitted their resignations the previous day.

He called on "the armed forces to devote themselves to ... pursuing Al-Qaida hideouts in the desert of Anbar" and for the army to turn over "the administration of the cities to the hands of the local and federal police," a statement on his website said.

Maliki praised the closure of the camp, saying that it was moving toward the control of "terrorist groups", and that it was shut down in cooperation with the local government and tribal and religious leaders.

The violence continued in the Ramadi area on Tuesday, where fighting killed three gunmen and an Iraqi army sniper, while three militants were wounded, police and a doctor said.

An AFP journalist in Ramadi reported sporadic clashes in the area, which was under curfew, and said items including food and petrol were in short supply.

Security forces killed 10 gunmen on Monday in the Ramadi area during clashes as the protest camp was taken down, while violence also spread to the nearby city of Fallujah.

There was also political fallout, with 44 MPs, most of them Sunnis, announcing they had submitted their resignations.

They called for "the withdrawal of the army from the cities and the release of MP Ahmed al-Alwani," a Sunni who was arrested during a deadly raid on Saturday.

The raid on Alwani's house, which sparked clashes that killed his brother, five guards and a security forces member, also raised tensions.

While fighting broke out in the Ramadi area as the camp was closed, it was ultimately shut down without the level of deadly violence that accompanied the last major security forces operation at a protest site.

On April 23, security forces moved on a protest camp outside the northern town of Hawijah, triggering clashes that killed dozens of people, sparking a wave of revenge attacks and sending death tolls soaring.

The camp on the highway outside Ramadi, where the number of protesters had ranged from hundreds to thousands, included a stage from which speakers could address crowds, a large roofed structure and dozens of tents.

The demonstrations tapped into longstanding grievances of Sunni Arabs, who say they are both marginalized by the government and unfairly targeted by security forces.

While the government has made some concessions aimed at placating Sunnis, including freeing prisoners and raising the salaries of anti-Qaida militiamen, underlying issues remain unaddressed.

Violence in Iraq has reached a level not seen since 2008, when the country was emerging from a period of brutal sectarian killings.

More than 6,800 people have been killed in Iraq violence since the beginning of the year, according to AFP figures based on security and medical sources.

The giraff killed 130.000 people, mainly sunni. The iraqi Shiite PM thinks he can do the same. Next step is HA doing it in lebanon as they are helping the giraff out. The shias turned out 2 be worse criminals than the now defunct Saddam.

Fortunately, Iraqi government woke up, and now understands that no matter how much they compromise with the takfiris, the suicide bombing wont stop, so they had 2 choices, fight back or die slowly, i love how you insects whine everytime people stand up to you, but when you kill people it is halal right?

Im not moslem, so don't talk halal w/ me. Shias r mass murderers and some sunni r terroristas. U defend the mass murderers, its ur right.
Talking about insects, who in lebanon copulates like cucarachas? Pretty much the shias. So again, u r wrong my stick. Chupamelo hijo and happy new year!

You are definetely not a Christian neither. I saw you say takbir jesus the other day. Hmm you are not a muslim, so you must be a Wahabi then?

And the other time when you mentioned, Shia,Druze, Alawi etc. were not muslim, now who else judge others of not being muslim, other than takfiris? Christians don't judge who are muslim and who's not.

Because I've got culture, I read books. Something u lack!

Druze, alawites etc, were incorporated in Islam about a century ago. The truth is they r not. Go educate urself and return here only when u r done!

Really! What have the Al-Qaida been doing to the Shiite and Christians citizen in Iraq for the past 10 years.
Let's do the math:
On a weekly basis a suicide bomber kills at least 70 children, women, and men while in the market, attending a funeral, attending prayers in a church or a mosque. To be conservative, this has been going for the past 7 years. Here is your formula:
70 dead * 52 wks * 7= 25480 innocent people...not even soldiers.

Take me for a fool or naive. Let's say as per your claim, it was the Shia killing Sunni since Saddam Hussein and not the other way.

Somebody go and tell mystic that 44 MPs and the iraqi VP resigned coz of the campaign against sunnis. Are they all takfiris ? Moqtada Sadr himself denounced Maliki and his sectarian militias. Maliki's term is finishing in April and wants to be elected for his 3rd one by the shia majority on the slogan : I protect u from the sunnis, from Yazid like he said. This animal uses the religion for political purpose.

@cedre the mission was accomplished, the Iraqi Police forces are taking over Anbar now.