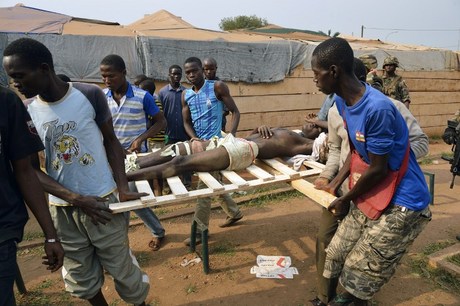 Rival militiamen struck a truce Sunday and hugged each other in a neighborhood of the Central African Republic's capital on the eve of consultations aimed at replacing the president who resigned under international pressure.

The event reported by witnesses and CAR's chief of staff offered a glimmer of hope that weeks of deadly sectarian violence would end following the resignation Friday of Michel Djotodia, the mainly Christian country's first Muslim president who left to Benin on Saturday.

It followed deadly weekend violence including reports of cannibalism and widespread looting in the capital Bangui. The situation in Bangui was calmer overnight Saturday but looting was still occurring Sunday.

CAR chief of staff General Ferdinand Bomboyeke confirmed witness accounts of the laying down of arms which he said occurred after a "deal obtained" by the rivals fighting for days in a southern part of Bangui called Bimbo.

The fighting had involved men belonging to the mainly Muslim ex-Seleka rebels who brought Djotodia to power in March and Christian anti-balaka militiamen.

It was the first scene of this kind in Bangui following weeks of bloody sectarian violence.

The truce occurred after members of the French force in Bangui came to carry out a mediation effort, Roger Kombo, a CAR official said.

The fighters "hugged each other. They asked for forgiveness as people cheered," Kombo told Agence France Presse.

The fighters from both sides then went together to the neighborhood market and re-opened the checkpoint, allowing people in the area to travel about freely again, he said.

The neighborhood Seleka commander, Captain Souleimane Daouda, told AFP that "we reached a ceasefire" with the anti-balaka militiamen in the area.

"There were negotiations all night. Early this morning we met. We told each other that we had no reason to fight since Djotodia is gone. We await instructions from the future authorities."

The National Transition Council, or provisional parliament, said it will on Monday begin its consultations with politicians and civil society members in a bid to elect Djotodia's successor.

The council's speaker, Alexandre-Ferdinand Nguendet, is tasked with convening a special session of the parliament to elect a new temporary president.

The council's deputy speaker Lea Koyassoum Doumta sketched out the criteria the new president must meet.

"He must be someone who can unite Central Africans, restore security, ease tensions, put everybody back to work, and pave the way for free, democratic and transparent elections," she told AFP.

Doumta said he must also "reassure" the ex-Seleka rebels as well as the anti-balaka groups formed to defend against and avenge the excesses committed by the former rebels.

The new president will inherit a country in turmoil with a climate of sectarian hatred, nearly a million people displaced in a country of 4.6 million, an unprecedented humanitarian crisis, a paralyzed government administration and an economy in chaos.

He will have little time to work magic even if he benefits from the political, military and financial support of the international community; the timetable for the transition calls for general elections to be held no later than the first half of 2015.

But France, the former colonial power which is spearheading international efforts to end the crisis here, wants elections to be held as early as the end of 2014.

Under the constitution that came into force when Djotodia came to power, the transitional president is excluded from running in the elections.

Despite the positive developments, there was still looting Sunday.

Near the 20,000-capacity stadium in the center of the capital, a gang of young men armed with machetes and clubs attacked a store, prompting the robust intervention of Congolese troops serving in the African peacekeeping force MISCA, an AFP correspondent said.

The Congolese troops chased the looters and arrested four of them unceremoniously.

Similar incidents of looting, involving gangs wandering throughout the city in search of homes or stores to rob, were reported in other neighborhoods of Bangui.

Ten months of violence have displaced a fifth of the country's population, and the sectarian flare-up has killed more than 1,000 people in the past month alone, despite France's military intervention and the presence of the African peacekeeping force.