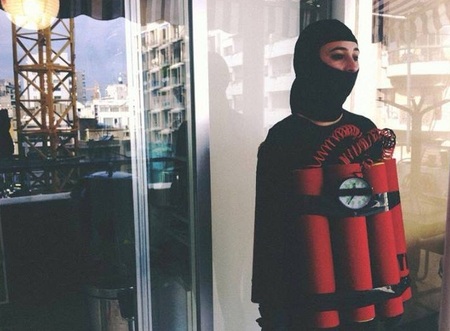 Lebanese woman Rima Najdi has come up with a unique way to protest the recent deadly bombings that have rocked Lebanon.

She wrapped herself in a hoax suicide vest and roamed several Beirut streets on Sunday.

The woman "wore a vest carrying fake sticks of TNT and wandered in Beirut's streets on Sunday," the pan-Arab daily al-Hayat reported.

People rushed to take pictures with the “suicide bomber,” said the newspaper.

Al-Hayat said the woman walked through Hamra, Ain el-Mreisseh, Downtown, Gemmayze, Ashrafiyeh and Ras al-Nabaa to “shed light on the meaning of being Lebanese and how you don't know when you might be the victim of a bombing or a terrorist act.”

According to the newspaper, Najdi is a painter and performer who lives in Berlin and shuttles between Lebanon and Germany. She inaugurated a painting exhibition in New York in November.

With all due respect this must be the stupidest comment I've ever read.

Did you mean if she went to Tripoli she'd not be considered a HZBLH operative and shot?

Iran is a country of resistance! Their thoughts are with us every step of the way!

What exactly is a Aouni neighbourhood PS? I'm curious. My home back in Lebanon is in Rabieh and not far from where Aoun himself lives. Will that make it a Aouni neighbourhood? I also am not aware of Aounis or LF or Kataeb or whatever beating anyone with sticks. Are you aware of any? Please enlighten me.

I hope that never happens ultrahabib. The country has had enough of people's hatred, ignorance and anger from all sides

that lady should be arrested for weapons of mass destruction.
WHAT A NOSE !!!!

I would have wished that the performance done by the artist would have initiated a different kind of discourse on this forum which is unfortunately a mouthpiece for bigotry.
The Artist is obviously making a statement about trying to keep a "normality" in our lives while fear of death is imminent.
This discourse reminds me of the Christian-Muslim discourse during the Lebanese civil war now it has the same bad taste with different names.
Communicating and expressing your point of view is always healthy but i wish it could include respect and tolerance of the other without the constant bashing.

I totally agree with you stainlessteal

of course you do