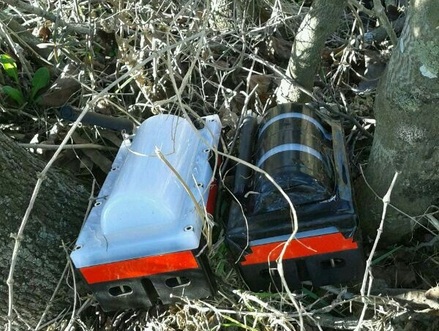 Two computers with Hebrew writings were found on Saturday in a southern disputed area on the border, an army communique said.

“The Indonesian patrol in the UNIFIL found a suspicious object in a disputed area near (the southern border town of) Adaisseh,” the statement detailed.

An army patrol soon arrived in the scene and inspected the object.

“The troops found two computers with Hebrew writings on them,” the communique revealed.

“Investigation is currently underway with the cooperation of the UNIFIL to uncover the details surrounding Saturday's discovery.”

Earlier in the day, the state-run National News Agency said a two-piece object resembling a spying device was found planted under a tree in Adaisseh.

“The object was placed in al-Mahafer neighborhood in the town, in an area that is 150 meters away from the barbered wires to the south of Misgav Am settlement near Adaisseh,” reported the NNA.

The NNA added: “The army immediately took measures and opened a probe to uncover how was the device placed in this disputed area.”

Meanwhile, an Israeli force mobilized near the gate of the barbed wires as the UNIFIL deployed its troops in the area, according to the same source.

UNIFIL spokesperson Andrea Tenenti commented on the developments of Saturday evening, assuring that calm is prevailing in Adaisseh.

“We will demarcate the area is which a suspicious object was found and then investigation will take its course,” he added.

I heard that ice-man was brought in to translate the writings. Can anyone confirm this.

If they find any with Iranian writing, I am sure you will be able to help.

Even a half-wit like you is in a position to translate Hebrew, just Google it. But if you Google it from Hizbullah's tip of the Iranian crescent you might get in trouble.

It seems ice-man is mentioned everywhere:) He must be a great guy, smarter than all of you.

Are you trying to earn yourself a date with ice-man.

lol you're all idiots!

How can an old looking device planted just near the border and not connected to anything be useful to spy? You don't spy that way nowadays, but rather in infiltrating communication network and with strong ground installations.

This looks like a clumsy Hizbullah manipulation to find another excuse to wage useless wars so as to justify their upper-hand on Lebanon and their illegal weapons. Actually, only them in Lebanon know Hebrew.

what do you know about spying? to make such blanket statements about is used or not used nowadays, you must be an expert.
here's a wild theory: these devices were dropped there for an agent on this side of the border to collect and plug into a system somewhere... aint that a possibility mister expert spy?

ps: every soldier in lebanon goes through hebrew courses during training, part of "know thy enemy" doctrine.. you'd think a master spy such as you would know this...