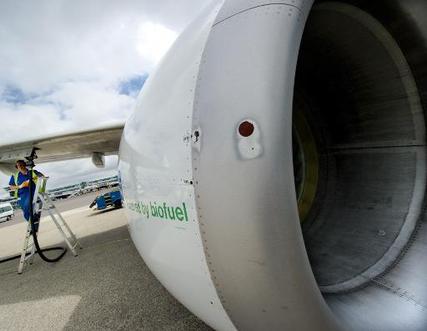 Aerospace giant Boeing and its research partners in the Middle East said Wednesday they would start field trials after recording progress in making biofuel from desert plants fed with seawater.

The Sustainable Bioenergy Research Consortium, affiliated with the Masdar Institute of Science and Technology in Abu Dhabi, will plant two hectares (five hectares) of the saltwater-tolerant plants called halophytes in the region's sandy soil and the plants will be fed with waste water from a fish and shrimp farm.

"Plants called halophytes show even more promise than we expected as a source of renewable fuel for jets and other vehicles," said the Consortium's director Alejandro Rios.

The plants have seeds which are high in oil content, but the project has found the shrub-like plants to be more effective than other crops in producing fuel due to their cell structure.

That is due to their very low level of lingin, which binds plant cells together, meaning it takes less energy to process the entire plant into fuel.

Funded by Boeing, Ethihad Airways and the petroleum refining company Honeywell UOP, the project aims to develop a sustainable aviation biofuel that emits 50 to 80 percent less carbon over its life cycle than fossil fuels.

Criticism of early biofuels is that they are made from food crops, or competed for land and water with food crops, driving up food prices.

The pilot project, expected to begin later in 2014 and last three years, will test whether it can efficiently produce biofuel while growing the non-edible crop on arid land unsuitable for food crop cultivation using waste seawater.

The crop should even help clean the water before it is returned to the sea, helping reduce damage to sensitive mangroves.

"This is real progress in developing a truly sustainable aviation biofuel from a renewable plant source, appropriate to our environment," said James Hogan, the head of the Abu Dhabi-based airline Etihad.

Last weekend Etihad conducted a demonstration flight with a Boeing 777 using a biofuel developed with the Masdar Institute, a local refinery, and French oil company Total.

With the global aviation market expected to continue to grow, Boeing's president for the Middle East, Jeffrey Johnson said "sustainable aviation biofuels is a key component of our strategy ... to reduce aviation's carbon emissions."