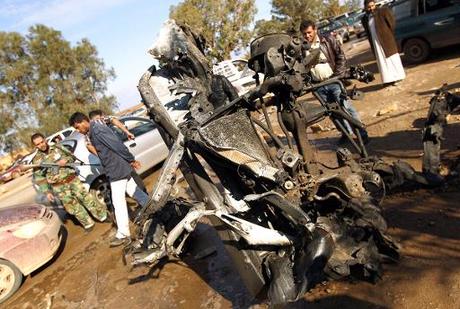 Violence in Libya killed 643 people last year, amid a sharp rise in crime, according to a parliamentary report that laments a lack of effective policing in the increasingly lawless North African country.

Excerpts of a report by the internal affairs committee of the General National Congress did not give comparative figures for deaths in 2012 nor data on crimes committed.

Since a NATO-backed uprising ousted and killed Moammar Gadhafi in 2011, Libya's authorities have struggled in vain to contain lawlessness, much of it perpetrated by former militias who fought to overthrow the long-time dictator.

There are almost daily reports of violence across large swathes of the country where ex-rebels rule, including al-Qaida-inspired groups which have taken advantage of the lawlessness.

The eastern city of Benghazi, cradle of the 2011 uprising, has seen numerous assassinations of security personnel and judges, as well as a jihadist attack in 2012 against the U.S. consulate that killed ambassador Chris Stevens and three other Americans.

In its report, the committee said "crime has become a profession and a source of income in the absence of an effective police force, despite their being 250,000 policemen."

It noted that Libya has one policeman for every 30 people, saying that number is not high enough.

It attributed the rise in crime to "a lack of respect for the law and the impunity with which its perpetrators act," noting that the country is awash with weapons, mostly in the hands of former militias.

The committee also highlighted the fact that the government has integrated into the security forces only 29.6 percent of the estimated 170,000 militiamen who fought the Gadhafi regime. Many of the rest are refusing to give up their weapons.

The difficulty of the job is highlighted by the fact that Libya has had four interior ministers since Gadhafi's overthrow, with the last two having quit.

Deputy Prime Minister Sadik Abdelkrim currently holds the post in an interim capacity, while Zeidan continues to look for a permanent replacement.