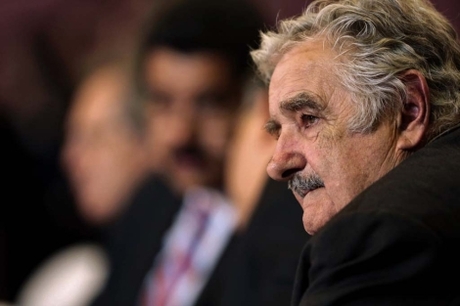 Uruguay's president said he plans to meet in Havana with Colombia's President Juan Manuel Santos and FARC guerrilla leaders to urge them to accelerate peace talks.

President Jose Mujica's offer to mediate comes as Colombia has stepped up military operations against the rebel group, killing 26 rebels in a series of clashes since the weekend, according to the army.

Mujica, a former leftist guerrilla himself, told the weekly Busqueda in an interview published Thursday that he would meet with the two sides next week in Havana after a Latin American summit.

"I am going to talk with President Juan Manuel Santos and the FARC," he said.

"I want to continue helping once again -- concretely, to accelerate the negotiating process," he said.

"Never before in the 50 years since this confrontation began, has peace been so close. This is a superior objective and deserves every support," he said.

The talks have been underway in Havana since November 2012, with preliminary agreements reached on two of five agenda points.

Negotiators are currently discussing how to deal with drug trafficking, an industry that has fueled the conflict.

Other issues that remain unresolved are compensation for victims of the conflict and the disarming of the rebel forces.

Mujica met in July with the rebel delegation to the talks during a visit to Havana, and met with Santos in September on the sidelines of the U.N. General Assembly in New York.