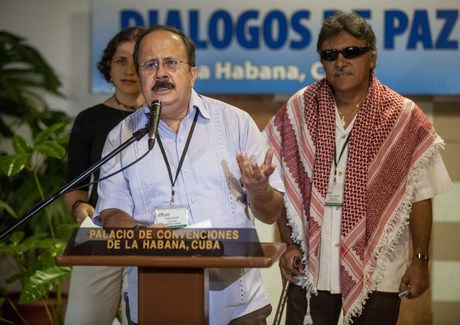 Colombia's FARC rebel central command Friday condemned an attack by its own guerrillas that left a civilian dead, highlighting possible divisions within the group as it attempts to negotiate peace.

"Those responsible never intended to cause injury to the non-combatant civilian population," the FARC secretariat said in a statement on its website.

But that does not "exclude its responsibility for the lack of foresight" in the attack.

FARC expressed "repudiation and condemnation" of the car bomb attack last week in front of a police station in Pradera, a town in the western Valle de Cauca region, where more than 20 people were injured in addition to the civilian killed.

The detailed condemnation was rare for FARC, which does not commonly issues statements of error, and it suggests division within the leftist guerrilla group.

It comes after Defense Minister Juan Carlos Pinzon accused the group of "acting like al-Qaida" while Colombian President Juan Manuel Santos blasted what he called "the irrational and contradictory way of acting by the FARC."

The Pradera attack shows "some form of dissidence among FARC's mobile columns," over which there is not "total logistical control" Jorge Alberto Restrepo, director of the Conflict Analysis Research Center (CERAC) told Agence France Presse.

And analysts say reports of continued FARC civilian abductions despite a pledge before peace talks to end the practice, are further example of defiance.

A report by the Peace and Reconciliation Foundation, which specializes in Colombia's armed conflict, points to some minority fronts, mainly in strategic drug-trade border areas, that did not even observe FARC's Christmas ceasefire declared by the group.

But the FARC has denied divisions within its ranks, claiming any violations of the ceasefire were in self-defense.

Ultimately the biggest threat to the peace process, some analysts say, would be a FARC attack creating a heavy civilian toll -- something central leadership may not have ordered but could not prevent.

His comments came during a week in which 26 rebels were reported killed in fighting in Colombia.

Santos has vowed to keep pressure on the FARC even as his government negotiates with the group in Havana.

The peace talks over the 50-year conflict, Latin America's oldest, began in November 2012.

Founded in 1964, the Revolutionary Armed Forces of Colombia is the country's largest rebel group, with an estimated 7,000 to 8,000 fighters.