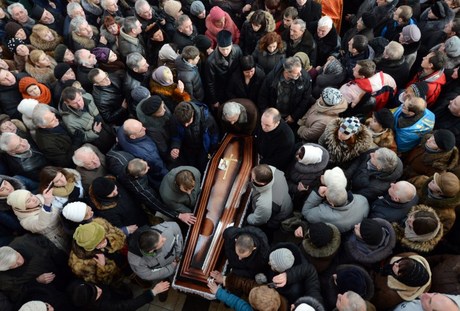 A Ukrainian anti-government protester found brutally murdered in a forest outside Kiev was on Friday given a hero's burial in his western home city of Lviv, in an emotional ceremony attended by thousands of mourners.

Yuriy Verbytskiy was abducted this week in Kiev by a group of individuals who dumped his body in a forest outside the city.

Another activist seized with him was released but badly beaten.

Verbytskiy's death has caused horror among the protesters who have for weeks been rallying against President Viktor Yanukovych on Ukraine's Independence Square, known as the Maidan. Many demonstrators believe Verbytskiy was specifically targeted.

Verbytskiy was given the honor of being buried at Lviv's historic Lychakiv cemetery, often considered to be one of the most beautiful cemeteries in the world and now only reserved for people of special prominence.

In a show of support for the pro-EU, anti-government protest movement, several top local officials attended the funeral including Lviv mayor Andriy Sadovyi and the speaker of the local parliament Petro Kolodiy.

"Today this hero of Ukraine was accompanied on his last path by tears from women and tears from men. He loved life and was against violence. He was murdered because he did not want to be a slave," said Sadovyi.

Verbytskiy's brother described him as a man who could not stand unfairness.

"He first went to the Maidan in December. Then he returned there when he heard about the anti-protest laws. We asked him to come home... But he refused, saying the Rubicon had already been crossed," said Sergiy Verbytskiy.

His coffin was draped in the Ukrainian national flag at the end of the funeral service attended by some 10,000 people, many of whom openly wept.

The circumstances of his death remain unclear. The activist kidnapped alongside him on Tuesday, prominent Ukrainian opposition journalist Igor Lutsenko, said after returning to Kiev that he had been subjected to a mock execution but was then able to stagger to safety.

Lviv, a bastion of pro-EU support in Ukraine and a city where Yanukovych is openly despised, has already seen the offices of the Kiev-appointed regional governor stormed and occupied by protesters.

Ukraine is still reeling from five days of heavy clashes between protesters and police in the capital, with activists saying the unrest has left five dead while the authorities have confirmed two deaths.