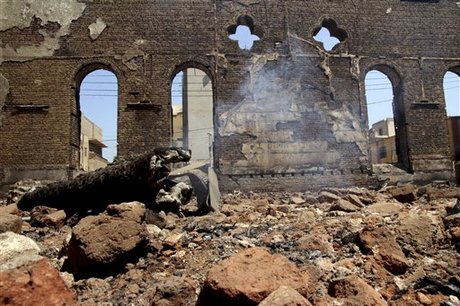 Gunmen shot dead a policemen guarding a church in Cairo on Tuesday, and wounded two others, security sources said, hours after another attack claimed the life of a police general.

The shootings come a day after Egypt's military backed its chief Field Marshall Abdel Fattah al-Sisi, who led the ouster of Islamist president Mohammed Morsi, to run for the presidency.

Security sources said gunmen in a car opened fire at the policemen guarding a church in western Cairo, killing one and wounding two. One assailant was arrested while two others fled on foot.

This attack on an Egyptian Christian church must be a result of Assad Syria.
According to Kerry and company, Assad is a terror magnet. Get rid of Assad, you will have no terror.

May God break the hands that did this to our churches, may God burn them all in hell's hottest embers, may they be cursed for times eternal. he who touches one wall of God's churches shall perish, and in the Middle East the justice of God and his wrath is now being made as the book says.

Typical compassionate christian, doesn't care that one human is dead and two injured, just that bullets were fired in to some meaningless pile of bricks

I have tried to write several messages to you, but your christian censorship does not allow any of them. Love live hypocrisy.

Sickening terrorists I hope they exterminate all of them.