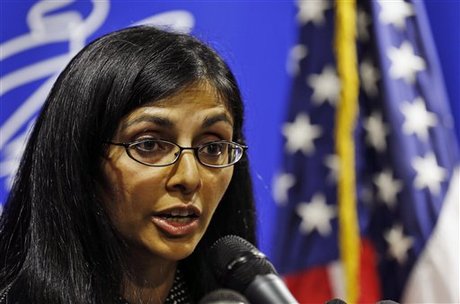 Democracy is under threat in Sri Lanka and its rights record has deteriorated in the five years since the end of a bloody ethnic war, a top U.S. envoy said Saturday.

Nisha Biswal, assistant secretary of state for South and Central Asia, said Colombo had failed to ensure reconciliation, justice and accountability, and pressure was building for a foreign probe.

"Lack of progress in Sri Lanka has led to a great deal of frustration and skepticism in my government and in the international community," Biswal told reporters at the end of a two-day visit to Sri Lanka.

She said the U.S. favored a "domestic process" to investigate allegations of war crimes, including charges that thousands of civilians were killed by government forces in the final months of fighting in 2009, but there was no progress.

"The international community's patience is wearing thin," she said, adding mounting calls for an external investigation are the result of Colombo's failure to show progress.

Britain's Prime Minister David Cameron warned during a Commonwealth summit in Colombo in November he would use London's U.N. position to press for an independent international investigation unless Colombo showed results by March.

Biswal said the U.S. was moving another resolution against Sri Lanka at next month's U.N. Human Rights Council meeting in Geneva to nudge Sri Lanka to do more to ensure "reconciliation, justice, and accountability".

"Respect for human rights and a promotion of transparent and democratic governance are essential. Unfortunately, continued deterioration in these areas is already beginning to take its toll on democracy in Sri Lanka," she said.

She met with Foreign Minister G. L. Peiris, opposition leader Ranil Wickremesinghe, and traveled to the island's former war zone of Jaffna in the north, where she met with the newly-elected Tamil politicians in the region.

Sri Lanka's government made no formal reaction to Biswal's hard-hitting remarks at the end of her visit, but official sources said Colombo had said it wants more time to deliver on reconciliation and accountability.

However, Biswal widened her criticism of the government of President Mahinda Rajapakse to include corruption, an area the international community has skirted until she focused on it Saturday.

"We are concerned about the worsening situation with respect to human rights... as well as the weakening of the rule of law and an increase in the levels of corruption and impunity.

"All of these factors lead to undermine the proud tradition of democracy in Sri Lanka," she said.

She said the U.S. was also concerned about continued attacks against religious minorities in the mainly Buddhist Sri Lanka, where Christian and Muslim groups had faced physical violence in many places while police looked on.

"Respect for human rights and a promotion of transparent and democratic governance are essential," she said.

"Unfortunately, continued deterioration in these areas is already beginning to take its toll on democracy in Sri Lanka."

Sri Lanka has consistently denied what the U.N. calls credible allegations that up to 40,000 civilians were killed by Sri Lankan troops in the final months of the war that ended in 2009.

Government forces declared victory after wiping out the leadership of Tamil Tiger rebels in a no-holds-barred offensive that brought to an end to 37 years of ethnic bloodshed which, according to the U.N., had claimed at least 100,000 lives.

Before directing fingers towards Sri Lanka, the US Govt should stand infront of mirror and should look it's double face. On the name of elimination of terrorism the US has destroyed Afghanistan and butchered millions of innocent. Sri Lanka in real eliminated the terrorism from its soil, the US Govt is unable to digest it.............