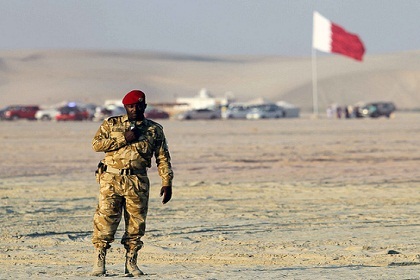 Egypt's foreign ministry said it summoned Qatar's charge d'affaires in Cairo on Tuesday to demand the handover of Islamist fugitives in exile in Doha.

Relations between the countries deteriorated with the Egyptian military's overthrow of Islamist president Mohamed Morsi and its subsequent crackdown on his Muslim Brotherhood movement, which Qatar backs.

Egypt had summoned the Qatari ambassador last month in protest at Doha's criticism of the crackdown on Islamists. He was not in the country on Tuesday.

Several Muslim Brotherhood leaders, and allied Islamists, fled to Doha following Morsi's ouster in July. Some are wanted for trial in Egypt.

Foreign ministry spokesman Badr Abdelatty told a news conference the Qatari diplomat was told "it was necessary to hand over those who are wanted by Egypt."

Egypt's military-installed government designated the Brotherhood as a terrorist organisation in December. It says Arab states that signed a 1998 anti-terrorism treaty should hand over wanted members of the group.

Dozens of Muslim Brotherhood leaders, including Morsi himself, face separate trials on charges ranging from inciting violence to espionage.

Egypt has also cracked down on the Qatar-based broadcaster Al-Jazeera, which it accuses of supporting the Islamists.

Prosecutors last week referred 20 people to trial they accused of working for the broadcaster, including a detained Australian and two Britons who are abroad.

They are accused of broadcasting false news. The Egyptians in the case are also accused of joining a terrorist group.

About time they hold the host terrorist countries accountable

Yea, starting with Egypt and Syria. But you don't think killing 2000 protestors in Egypt or 100,000 civilians in Syria is terrorism. No, the brotherhood who failed to rule over 90 million people and turn a failing economy around in 1 year because the deep state withheld food, fuel, electricty, and security, and then are persecuted and tortured, are called terrorists.

voiceofreason... morsi and the brotherhood had control over egypt with billions of dollars of support from qatar. The have no one else to blame except themselves. Morsi tried to legislate himself as above the judiciary and install sharia law. 10 million protesters from every major city in eygpt protested and called for his removal. the brotherhood had many enemies in eygpt especially from the military but morsi walked straight into their trap. intolerance of minorities and secular society is the brotherhood's nail in their coffin

Of course they made mistakes. You can even say they failed, but having all police magically reappear on the streets, anf having fuel and electricity magically come back after the military performed a coup, is silly to think morsi is the sole reason for egypts continued economic failure. People were unhappy and the military was smart and made it look like it was all morsis fault. If the Muslim brotherhood really was extreme then why did they rule the country for one year and not kill anyone??? This "terrorist organizatoon is nonsense. They won a majority in 3 different elections with real voters, not a tank and a gun.

And "10 million protestors" from every major city is false, sorry. It was fabricated signatories on a piece of paper. Not protestors in the squares. Tahrir can only fit a few million, if that.

Lol, your right....and keep believing what you are told to believe...

Both are terrorist organizations

"keep believe what you are told to believe" isn't that what your marji3 is for?
Kanaan no Muslim Brotherhood has not been classified as a terrorist organization by any international body whereas hizbocrap has.

Qatar played an extremely bad role supporting extremism in Syria and Egypt, and the emir and his prime minister were forced to step down for those reasons.

btw, hizbushaitan was supporting the muslim brotherhood in Egypt, and they received a major blow when they have been ousted.

so for the idiots commenting above: know what was going on before commenting.