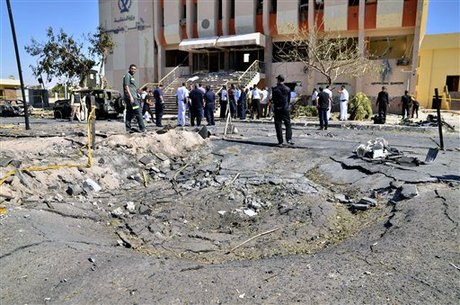 Suspected militants blew up a gas pipeline in Egypt's Sinai peninsula on Tuesday and gunmen shot dead a policeman in the Suez canal city of Ismailia, security officials said.

Attacks in the Sinai and violence targeting soldiers and policemen across Egypt have surged since the military's overthrow of Islamist president Mohamed Morsi in July.

In Ismailia, two unknown gunmen riding a motorcycle shot dead the policeman while he was standing at a traffic light, officials said.

Since January 23, 18 policemen have been killed in militant attacks, according to an Agence France Presse tally based on reports by security officials.

In the Sinai, which borders Israel and the Gaza Strip, militants Tuesday planted a bomb under a pipeline that transports gas to an industrial area south of Al-Arish city, security officials said.

No one was injured in the attack, the fourth this year in the restive peninsula.

The army has poured troops into the mountainous and underdeveloped Sinai peninsula, to combat the growing militancy.

Militants had previously forced a halt to gas supplies to Israel and Jordan by repeatedly targeting the pipeline following the 2011 overthrow of Hosni Mubarak.

An attack on January 27 was claimed by an al-Qaida inspired group, Ansar Beit al-Maqdis or Partisans of Jerusalem.

The group has claimed most of the deadliest attacks in Egypt since the army ousted Morsi, saying that they were in revenge for a deadly crackdown by the security forces on his supporters.

More than 1,4000 people have been killed in the crackdown, according to Amnesty International, and thousands jailed.

Takfiris, everywhere they go, chaos follows. Be it Lebanon, Syria, Egypt etc. Doesn't matter, just sad we have people in this country whom are actually funding and supporting them against the Lebanese people.

Yeah Mystic you are right the terrorist takfiris, everywhere they go, chaos follows. Be it Lebanon, Syria, Egypt, Iraq, Bulgaria, Taiwan, Azerbaijan, Germany, Mexico, Argentina etc. Doesn't matter, just sad we have people in this country whom are actually funding and supporting them against the Lebanese people.

They called them Hezbollah, because they were Shia no other reason than that. Just like they call all demonstrators in Bahrain or Saudi Hezbollah members.

Ignorance is bliss, so you must be extremely blessed Mystic. You don't even know the organization you claim to support!
In reality the "they" in "they called them" are Hezbollah themselves. After at first denying any knowledge of this cell, when the Egyptians produced Mouhammad Yousef Mansour Ahmad (a.k.a. Sami Chehab), Nasrallah himself had no choice but to admit that this is a member of Hezbollah.