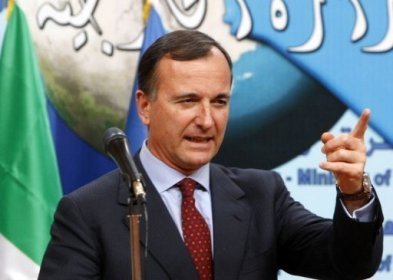 Italian Foreign Minister Franco Frattini stated that the situation in Syria may have dangerous repercussions on Lebanon, stressing that Lebanon needs stability now more than ever in order to meet its people’s needs.

He hoped in an interview to Sada al-Balad newspaper to be published on Wednesday that the Special Tribunal for Lebanon would be able to continue its work effectively and with the cooperation of all concerned sides.

He voiced his country’s complete support for the tribunal, adding that the confidence vote that the Lebanese government received is a fundamental development that would allow Lebanon to confront the economic and political challenges.

On the Italian Senate’s decision to withdraw 700 Italian troops from UNIFIL, Frattini said that Italy is still committed to protecting Lebanon’s security and stability in light of its participation in the international force.

He explained that its decision took place in cooperation with the U.N. and it will be gradually implemented.

He noted that the Italian unit in the United Nations Interim Force in Lebanon is among the largest in the international force.

Last week, the Italian Senate decided to withdraw 700 Italian troops from UNIFIL as part of a mission to reduce the number of its troops in peacekeeping forces in several countries.

Sources said that the decision stemmed from economic reasons and not security ones considering the decision was made shortly after French UNIFIL troops were injured in a roadside bomb that was targeting their patrol near the southern city of Sidon on July 26.

Grazie Signor Frattini! The situation in Syria and any ensuing regime poses a threat not to Lebanon, but to the impostors who are in power through blackmail and political muder ! Those who are in power, and in the accusation box, have given themselves the vote of confidence, confidence they can take Lebanon from bad to worst! I hope this doesn' t materialise and that the tricks turn against those who thought tricking others!

OK shut up and bomb Syria