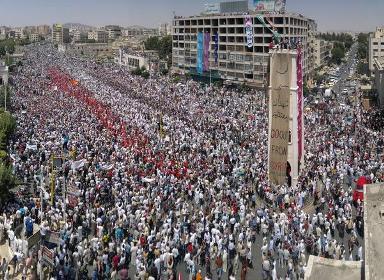 Syrian dissidents on Tuesday urged U.S. President Barack Obama to call on Syrian leader Bashar al-Assad to quit power and to press for U.N. sanctions over his regime's deadly crackdown on protests.

The demands -- presented in a first meeting between U.S. Secretary Clinton and members of Syria's disparate opposition -- added to U.S. domestic pressure on the Obama administration to take a tougher line against Assad's regime.

Radwan Ziadeh told reporters he and other U.S.-based dissidents told Clinton in more than one hour of talks that they need "President Obama to address the Syrian people and ask President Bashar al-Assad to step down immediately."

Clinton said last month that Assad had "lost legitimacy" after loyalists attacked the U.S. and French embassies for alleged meddling in internal affairs, but administration officials have stopped short of calling on him to step down.

When asked why Washington was reluctant to call on the Syrian leader to quit power, Ziadeh said administration officials feared the Assad regime would try to fan sectarian flames and spark a civil war.

But "we addressed this concern" and showed that groups of different backgrounds, including Christians, were involved in the protest movement, he said.

"This is actually the great example about the unity of the Syrian people against the sectarian investment that the regime is investing in Syria," Ziadeh told reporters.

Listing other demands, Ziadeh said "we need actually the U.S. to lead at the Security Council to get more sanctions at the U.N. level," on top of U.S. and European Union sanctions imposed on Assad and other members of his regime.

The 15-nation council remains divided over how to react to the Syria bloodshed, with Western nations demanding tough action and both China and Russia threatening to veto any formal resolution.

Clinton issued Monday a veiled appeal to Russia and China to condemn Syria at the Security Council.

Ziadeh also called for U.S. pressure "to refer the crimes against humanity committed in Syria to the International Criminal Court," which has issued a warrant for the arrest of Moammar Gadhafi for his bloody crackdown on the Libyan opposition.

Meanwhile, U.S. Senators Kirsten Gillibrand, a New York Democrat who is close to Clinton, and Mark Kirk, a Republican, and Joseph Lieberman, an independent, pressed for tougher U.S. action against Syria.

They said in a statement they will introduce "new bipartisan legislation that would establish tougher U.S. sanctions against Syria and hold President Bashar al-Assad’s regime accountable for its human rights abuses."

They added: "Under this bill, the president would be called on to block access to the U.S. financial system, markets, and federal contracts for companies that invest in Syria’s energy sector, purchase the country’s oil, and sell gasoline to Syria.

Such sanctions would bite because about one-third of Syria's export revenues comes from oil, they added.

The State Department said Monday it is weighing the possibility of further sanctions against Syria, including in the oil and gas sector.

Then after America helps, they'll say it was for oil and the muslims will stab them in the back like always. God bless the USA