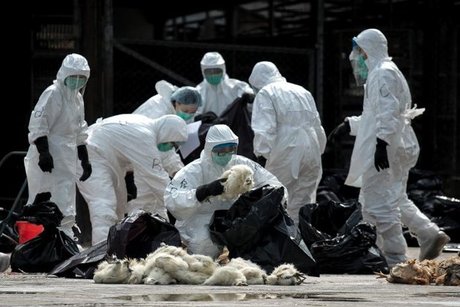 Hong Kong Wednesday confirmed a new human case of the deadly H7N9 avian flu, the fifth to be discovered in the city.

A 65-year-old man who had underlying medical conditions was hospitalized Tuesday after developing a fever and a cough and was in critical condition, the health department said in a statement late Wednesday.

He tested positive for H7N9, it said, adding it was an "imported case".

Preliminary investigations showed the man had traveled to the neighboring Chinese province of Guangdong from January 24 to February 9, and had purchased a slaughtered chicken in the village near his residence on January 29.

Seven family members had remained asymptomatic, with five classified as close contacts to be admitted to hospital for observation and testing.

Fears over avian flu have grown following the deaths of three men from the H7N9 strain in the city. All had recently returned from mainland China.

In the latest case on January 29, a 75-year-old man died shortly after he traveled to the neighboring Chinese city of Shenzhen where there were poultry markets close to where he lived.

A total of 31 people died from H7N9 bird flu in mainland China in January, the government announced Monday, making it by far the worst month in the outbreak.

There were a total of 127 confirmed human H7N9 cases in January, according to a statement by the National Health and Family Planning Commission.

Hong Kong is particularly alert to the spread of viruses after an outbreak of Severe Acute Respiratory Syndrome (SARS) swept through the city in 2003, killing 299 people and infecting around 1,800.