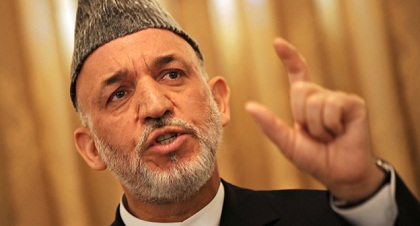 Afghan President Hamid Karzai on Tuesday condemned the killing of a former Taliban minister, saying the victim had recently returned from a Taliban meeting in Dubai where he had supported peace talks.

Abdul Raqeeb was gunned down in Pakistan's northwestern city of Peshawar on Monday as he left a religious seminary where he had been teaching.

He "was a supporter of peace and reconciliation and had just returned from Dubai after attending peace talks when he was killed in Peshawar", a statement issued by Karzai's office said.

It was the first official confirmation of a meeting of Taliban in the Gulf state to discuss the moribund peace process.

A Taliban office in Qatar that opened last June was meant to lead to peace talks, but instead it enraged Karzai after it was styled as an embassy for a government-in-exile.

Public efforts at reconciliation have since been frozen.

"No Afghan has real security abroad, especially those patriots who want peace and stability in their country," Karzai said in the statement.

A senior Afghan Taliban leader confirmed Monday that Raqeeb was part of a group in Peshawar which was "in favor of making some connection with the Afghan government over possible peace talks".

A senior member of Afghanistan's government peace council told AFP separately that Aga Jan Motasim, another former minister, was also at the talks in Dubai to "discuss joining the Afghan peace process".

He declined to say if any government mediators had joined the talks.

But some analysts say the releases could help kickstart the peace talks with the religious hardliners, who were ousted from power in 2001.

Pakistan is seen as crucial to peace in neighboring Afghanistan as it was a key backer of the 1996-2001 Taliban regime in Kabul.

Senior leaders of the Afghan Taliban have been targeted and killed in the Pakistani city of Quetta and in Peshawar but nobody has ever claimed responsibility.

Raqeeb's body was taken to Afghanistan to be buried in his birth place in the northeastern province of Takhar.