Gemayel to Run for Presidency Based on Local Situation, Calls for Election of 'Strong President' 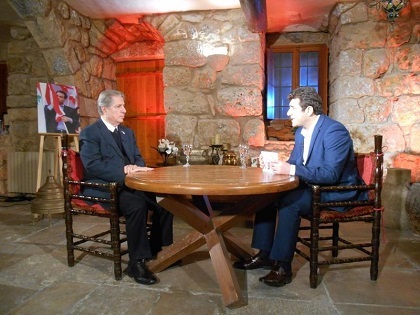 Phalange Party leader Amin Gemayel stressed that the upcoming presidential elections should be carried out within the constitutional time-frame, calling for consensus among Christian parties over the name of the presidential candidate.

“The Phalange Party reject by all means any vacuum at presidential post,” Gemayel said during an interview with the Tehran-based Arabic-language Iranian television channel al-Kawthar.

Asked if he is a candidate to the presidential post, the official didn’t rule out the option, saying that it “depends on the stage and the conditions that the country is passing through.”

Gemayel considered that the cabinet of Prime Minister Tammam Salam is demanded to carry out its tasks and follow up the delicate issues and not “achieve miracles.”

“The new government provided all the Lebanese military and security institutions the necessary cover to carry out their tasks and end the security chaos,” he pointed.

Gemayel said that “the shifting security situation in Lebanon was mainly caused by the lack of consensus among the Lebanese.”

President Michel Suleiman's tenure ends in May 2014, but the constitutional period to elect a new head of state begins on March 25, two months prior to the expiration of Suleiman’s mandate.

Gemayel emphasized that the Lebanese need to unite “to confront the terrorist that was nourished because of the protection provided by some politicians and the appropriate medium.”

He stressed the importance of an International and regional cooperation to confront terrorism and diminish it.

And no chupachup for you!

(1). It looks like these old dinosaurs are trying to poke their fingers deeper into our eyes. Good blinking heavens, what is wrong with us all, for God's sake!! Last month it was all about Geagea becoming president (the cooking pot), then we had recently good old man Aoun, (The pot cover), now we have old man Gemayel, (the pot handle). Is it that bad with us, that in the 21st Century, in the year 2014, we Lebanese can't but turn back to those very people that wrote the darkest pages of our painful history? Are we some kind of emasculated hung on masochism? Are we kinda telling the world that despite all these brilliant young women and men that we have, yes, that correct, brilliant people who are designing, building and running the Gulf, and despite it all, Lebanon, that we cannot find in their ranks one decent and capable person to be president?

Lebanese politicians seem to be so comfortable, they never retire! I wish the people of Lebanon revolt in the next election and dump them all... Lots of decent qualified young people in Lebanon, it is their turn to take charge and build the country......

Amine's action followed by Aoun caused the collapse of the Lebanese lbs....

God help us and Lebanon. What a joke Lebanon is.

The only people that are sacrificing themselves for their country are the Lebanese Soldiers , implement " Marshal Law " for a period of 5 years' or indefinitely until conditions permits when we have wiser , intellectual , energetic younger generation to lead !
Signed Wolf .

I vote for that

History has taught us over and over again that even well–intentioned Marshal Law impedes the development of any free thinking, wiser, intellectual, energetic younger generation of leaders although it's implementation sometimes, at first, looks good on paper.

I don't agree on Amin Gemayel , we need new blood and different than the usual

Someonr needs to step in and put their foot down. We have too many diverse Islamic groups that need to be neutralized.

The warlords are happy running Lebanon. They purposely handicap the economy to force the new generation out of the country to help build other nations and send their hard earned money back to Lebanese banks. What's left is the older generation that remembers their old ze3ama at the height of their careers during the civil war. They can relate to those times. They relate to the sectarian divisions and hold on to their fears of one day one sect dominating the country. That's why these warlords are still around. It's time to turn a new page and retire these warlords once and for all.

Isnt there a contradiction there when Amin Gemayel nominates himself as president while at the same time he says Lebanon needs a strong president?