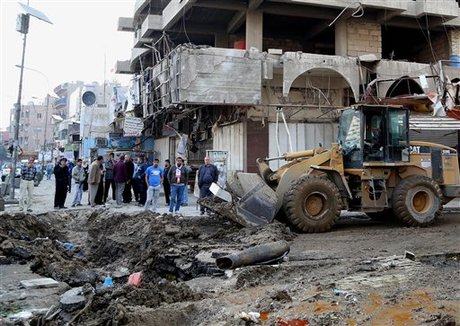 Attacks in predominantly Sunni Arab areas north and west of Baghdad on Sunday killed six people, all members of the security forces, the latest in a year-long surge in bloodshed.

Less than two months before parliamentary elections, Iraq is mired in its worst violence since 2008, when it was emerging from a period of brutal sectarian bloodletting that killed tens of thousands of people.

The spike has been driven by widespread discontent among the minority Sunni Arab community, which complains of being marginalised and unfairly targeted with heavy-handed security measures, and by the civil war in neighbouring Syria.

Among the dead were three soldiers, a police officer and an anti-Qaida militiaman in attacks in Hawijah, Balad, Baiji and on Baghdad's western outskirts.

Also on Sunday, a bodyguard of Deputy Electricity Minister Khaled Hassan was killed and another was wounded when militants attacked the official's convoy north of the capital, Hassan told Agence France Presse.

Efforts by authorities in recent months to curb bloodshed, mainly military operations and concessions that fall short of Sunni demands, have had little effect.

More than 700 people were killed in February, according to separate tolls compiled by AFP, the U.N. mission to Iraq and the Iraqi government.

The overall figure was lower than in January, but still one of the highest in years.