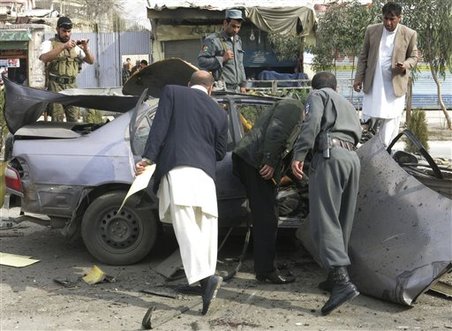 A magnetic bomb attached to a district governor's vehicle exploded in eastern Afghanistan on Saturday, killing the governor and his bodyguard, provincial authorities said.

The attack in Nangarhar province highlights the security threat surrounding presidential elections in a month's time, when voters will choose a successor to Hamid Karzai.

"Today 9:00am, a mine attached to the vehicle of Nazyan district governor, Noor Agha Kamran, was detonated in the city of Jalalabad," Nangarhar police spokesman, Hazrat Hussain Mashriqiwal told AFP.

"Unfortunately, district governor, Noor Agha Kamran was martyred along with his one bodyguard, and several passersby were wounded in the attack," he added.

Nangarhar governor spokesman Ahmad Zia Abdulzai said five bystanders were slightly wounded. They were discharged from the hospital after treatment.

No one immediately claimed responsibility for the attack but Taliban insurgents regularly use such tactics as part of its fight against Karzai's U.S.-backed government.