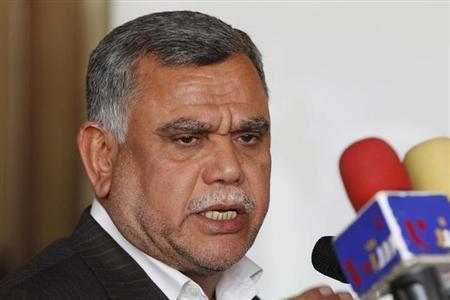 Iraqi Transport Minister Hadi al-Ameri on Saturday stressed on the “historical and brotherly” ties between Lebanon and Iraq, assuring that recent events will not change these relations.

"The bubble that happened lately will not change the historical and brotherly relations between Baghdad and Beirut,” al-Ameri said at Rafic Hariri International Airport upon his arrival in Beirut, adding that Iraq will “probe the incident and penalize all delinquents.”

The minister, who was accompanied by a ministerial delegation, was referring to the latest strain in the Lebanese-Iraqi relations when Iraqi authorities forced a Middle East Airlines plane to turn around some 20 minutes out of Beirut because al-Ameri's son, Mahdi, had missed the flight.

"Even more, we have a strong desire to further improve these ties,” he noted.

"We want to reach an understanding on dealing with such incidents without all this media frenzy. We are very keen on developing the relations with this country and we have no problems with the MEA. I have even given my approval to increase the number of MEA flights to Iraq before a contract was signed.”

Public Works and Transportation Ghazi Zoaiter, who was at the airport to greet the Iraqi delegation, indicated that his talks with al-Ameri will be a pathway towards developing bilateral relations, particularly in the aerial transportation field.

Meanwhile, MEA Chairman Mohammed al-Hout announced that the Lebanese airliner will increase the number of its flight to Iraq.

"Also, by the end of March, MEA planes will start traveling between Beirut and Basra (in Iraq) twice per week,” he revealed.

Following Thursday's incident Iraqi Prime Minister Nuri al-Maliki and his spokesman Ali Mussawi ordered that "all those responsible for preventing the plane coming from Beirut from landing in Baghdad" be "dismissed and held responsible."

Consequently, the deputy head of Baghdad airport was arrested.

Samer "Kubba was arrested... because his action was wrong and harmful to the prestige of the Iraqi state," Mussawi told Agence France Presse.

Great news, now more Shia from abal abbas brigade will land at the airport on their way to Syria to perform their jihadist duties.

Iraq is a banana republic managed currently by iran.
where in the world such a thing would have happened?

Surely you mean the opposite. Does this look and sound like an evolved being to you?

god im so tired of the middle east. every peice of garbage with a few dollars becomes a king. hang them all.

Amazing! Instead of firing the deputy head of Baghdad terror airport, shouldn't the honorable minister fire his son for giving the order to the poor guy in Baghdad to force MEA to go back to Beirut.

It doesn't sound like anything is getting out of this guy except for empty words and threats. So I guess the cost of that little diversion will be passed on to passengers...