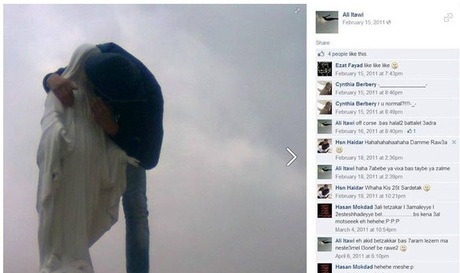 "Security forces in the Dahieh judicial department (in Beirut's southern suburbs) arrested A.I. for insulting a statue of Virgin Mary and posting a picture of the wrongful conduct on his page on a social media site,” LBCI television said.

President Michel Suleiman called in February for “appropriate measures” to be taken against a user who had posted a Facebook cover photo of himself kissing the statue of Virgin Mary.

A Baabda palace statement said Suleiman called for certain “procedures and appropriate measures” against the wrongdoer but did not mention whether the president was inviting for judicial action.

The arrested man, Ali Itawi, had written in one of his posts that virgin Mary “was no longer a virgin” after the kiss.

He first posted the photo in 2011 but he put it back as a cover photo a few months ago, causing a stir on social networking sites.

Oh my God ... I need to get a drink. I find myself agreeing with Mowaten.

another stupid m8 comment! just to defend those who cannot be defended....

however in the sectarian era we live in, such a stupid act translates as sectarian insult. ( as if one has to explain things to kids!)

arresting this guy is the least to do in such a period, although I consider that this guy belongs to asfourieh.

If this level of disrespect was against a certain other sect tires would be burning and retaliatory action by their followers.

I am surprised state agencies are busy arresting this loser..........

mowaten, if you keep repeating your propaganda it will not change the facts on the ground. I am not sure what kind of planet you live on, but for sure it seems very far away and not in touch with our universe. Your HA boys fired at the army in Laboueh, in Brital, they arrested a learned religious man for no reason but you refuse to see that.

lol mowaten ! were you there at the checkpoint to confirm or deny if shots were fired. It is all over the news but according to you it never happened.

I am not going to sit here and argue with you. You always pick and choose what serves your propaganda. The same article mentions:
"But media reports said there was a shooting between the convoy and Hizbullah members on al-Labweh road."
But you chose to omit that:(

All major news networks carried the news of shooting.

yea, only they didnt keep him in brital.

Childish behavior that is immitating Hezb silly childish 'we don't share' behavior. Maybe one day they will grow up.

Mowaten just as media reports don't make facts as you stated above, same for your conspiracy theories. I would also suggest HA ordered this boy be released to pacify public opinion over their members shooting at the LAF.

You people post comments as easy as wrapping a fallafel sandwich. This idiot was arrested because: (1) he is not an armed and dangerous criminal and easy to arrest, (2) his stupid stunt, though not criminal, reaches out and effects far greater numbers of Lebanese communities whether Christian or Muslim, and (3) it is a quick and clean way to discourage future copy cats. I am sure that Muslims wouldn't want to see a similar despicable freedom of wrongful expression towards their prophets or holly figures.

mowaten; you say "media reports don't make facts" but you use NNA which is a media report to try and prove there were no shots fired.

What about that all religions are man made ?

This is absolutely unaccepatable and sickening! i mean seriously there are no more boundaries for anything in this world !!! there is nothing sacred anymore! even in Islam they respect Mother Mary... and no it is not just a matter of a kiss or a statue.. there is a clear intention of disrespect here! what freedom of speech?? if we do not put boundaries for people to respect holly symbols (even if they dosagree with them) then let's all go and live in a jungle... at least animals know how to respect each other

But they are so quick to find the name of a suicide bomber before he blows himself up... just saying!

Naharnet didn't want to publish his name, but on the picture we can see it: Ali Itawi. I'd bet he his another furious M8 supporter...

Just for the sake of the art of Photograpahy how about publishing a pic of some man assf..king mam ali b abi bâtil? Art illimited

Please read Exodus 20:3-4
These are the first TWO commandments of the 10 Commandments God gave His people for a covenant with Him.

3 “You shall have no other gods before me.

4 “You shall not make for yourself an image in the form of anything in heaven above or on the earth beneath or in the waters below. 5 You shall not bow down to them or worship them; for I, the Lord your God, am a jealous God, punishing the children for the sin of the parents to the third and fourth generation of those who hate me, 6 but showing love to a thousand generations of those who love me and keep my commandments."

What this young man did was shameful,
but the statue and the worship of the statue itself IS ABHORRENT to God.
All of you who worship and pray to human beings and to statues, repent and turn away from this evil! God will not spare you on the day of judgement if you do not cease this! But know that if you do, and accept the great news of Christ, you will be saved!

no,
he meant mockery of a faith.
Mocking someone's faith is not a good thing.
There is a difference between awakening someone from sin and mocking them.
I do not mock people who worship statues and human beings. But I do call for awakening.

The act by itself is disrespectful and childless at best. If you believe in freedom of speech then .... no harm done, Just an uneducated idiot looking for attention and needs to be ignored.
He is not worth the money and the energy put into arresting and prosecuting him.

Statues are given way too much importance in Lebanon.

My full respects to you ya dear Mystic. God blesses those who uphold His will.

I don't know what he was thinking. Any Muslim who loves the virgin Mary as I do knows this is wrong. It is mockery, I certainly don't like people to mock anything about my Muslim faith. There fore the same respect should be given back. The virgin Mary is considered in Christianity and Islam as one of the best most beautiful woman who ever walked the face of the earth. To say or do anything against her is wrong. And to Full=disclosure above,, Sunni Muslims love and respect the virgin Mary too. I don't know what his punishment may be but he should do something good like donate to christian orphans, and go to the mosque and donate to the Muslim orphans as well. Or just post a card on him saying I am an idiot. lol hey that might work.. lol. make him walk through christian and Muslim neighborhoods. BIG Letters.. I am a JARHISH written in Arabic. lmao.

Shows that when it comes to respecting Christians, Hezbollah are no better than Salafists !

God does not exist.
Should I go to jail for saying that?