Mashnouq: We Understand Saudi Arabia's Purpose to Label Some Groups as Terrorist 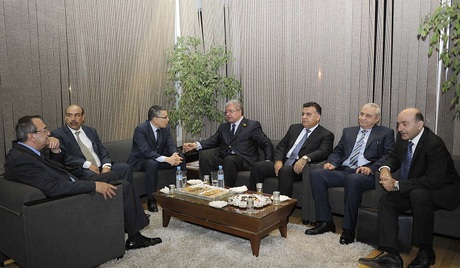 Interior Miniser Nouhad al-Mashnouq stated on Tuesday that Lebanon has taken a “clear position” on all forms of extremist terrorism.

He added in statement: “We understand Saudi Arabia's recent designation of the Muslim Brotherhood, Hezbollah in the kingdom, and al-Nusra Front as terrorist.”

The minister is currently in Morocco to take part in the 31st conference for Arab interior ministers.

“Lebanon has long suffered from terrorism and understands Saudi Arabia's purpose for designating the groups as terrorist,” remarked Mashnouq.

“There can be no leniency in confronting terrorism that is a threat to the future of all Arab countries,” he stressed.

Granting political freedom for peaceful organizations to function under the authority of the state will allow a country to confront division, he explained.

Saudi Arabia on Friday listed as terrorist groups the Muslim Brotherhood, Al-Nusra Front, which is Al-Qaida's official Syrian affiliate, the Islamic State of Iraq and the Levant (ISIL), the Shiite Huthi rebels fighting in northern Yemen, and "Hezbollah inside the kingdom", apparently referring to a little-known Saudi Shiite group.

The decision to brand the Brotherhood a terrorist group came a day after Saudi Arabia, Bahrain and the United Arab Emirates recalled their ambassadors from Qatar, which backs Brotherhood-linked groups across the region.

Let me assure you that the KSA has some of the finest lawyers on the planet and it is working on ways to label itself as a terrorist organization. Law is not made overnight. Many times it takes almost a day and a half, in some cases, a day and three quarters.
Open a Black's Legal Dictionary and read the definition, under US Federal law, of "terrorism". You can just about say that a state that has a law against terrorism is a terrorist state. Have a law against bombings, assassinations, fine. Be concrete and specific.

With the Iranian regime, indeed

At least they acknowledge their mistakes by that move. Not like Iran so far.

Go back to bed.

The world biggest crimminal is Bashar - second to none.

i wonder why karim's comment was censored? it only said the truth, ie: that saudi needed to label itself terrorist :D

It was only part of the truth. The whole truth would have included Iran/Syria/HA also.