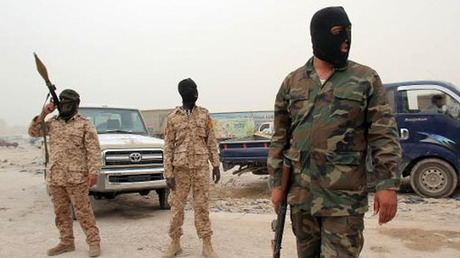 Libya's government announced Thursday it was mobilizing its security forces after acknowledging for the first time that "terrorist groups" were behind dozens of attacks against security services and Westerners.

An overnight government statement called on "the international community and in particular the United Nations to provide the necessary support to eradicate terrorism in Libyan cities".

"The nation finds itself in a confrontation with terrorist groups, and it falls upon the government to mobilize its military and security forces to fight this scourge," said the statement, published on the government's website.

"There will be no place for terrorism in Libya... and Libyans must be prepared for such a battle in terms of caution, awareness and sacrifice," said the statement.

Eastern Libya has become a bastion of Islamist extremists, with authorities until now avoiding a full-blown confrontation with heavily armed former rebels pending the formation of a regular army and police force.

The government indicated it would turn to "the national military force as it is of now" in its fight against terrorism, alluding to pro-government militias that battled Gadhafi's regime in the 2011 uprising.

While welcoming the official change of stance by the central authorities, analysts questioned whether they had the means at their disposal to carry through with their threats.

"The language of the government statement is the strongest yet since the death of Gadhafi" in October 2011, said Libyan security expert Abdelmoneim al-Akuri.

"But the government did not specify who are the terrorists it intends to confront nor how they intend to do so."

Political analyst Salem al-Allagui cautioned that the call for international help should not be interpreted as foreign intervention, which could transform the country into "a land of jihadists" to which extremists will flock to fight Western powers.

Allagui said the government faced an uphill battle as militants who have until now mainly targeted the security forces and Westerners could swing their sights on civilians and public places.

The government statement was published after a cabinet meeting held in the southern town of Ghat, two days after a car bomb at a military academy in the restive eastern city of Benghazi left at least seven soldiers dead.

It also comes after parliament last week ousted prime minister Ali Zeidan over his failure to bring law and order to the country.

The government said "the cities of Benghazi, Derna and Sirte and others are facing a terrorist war carried out by Libyan and foreign elements with hostile intentions."

Libyan authorities did not mention any particular group, but these cities are strongholds of extremists such as the jihadist group Ansar al-Sharia, which was placed on the U.S. terror list in January.

Ansar al-Sharia is suspected of waging attacks against judges and security forces, but also of being behind attacks on Western interests such as a 2012 assault on the U.S. consulate in Benghazi that killed the ambassador and three other Americans.

There have also been a string of attacks and kidnappings targeting foreigners in the North African nation.

A French engineer was shot dead in Benghazi on March 2 and a British man and a New Zealand woman were also found shot dead on a beach southwest of the capital in January.

In December, an American teacher was killed in Benghazi, and two French guards were wounded in a car bombing outside France's embassy in Tripoli last April 23.

Three years after the uprising, the government has come under increasing criticism from Libyans who accuse it of corruption and failing to provide security.

Criminals roam the streets, and rival tribes shoot it out to settle long-standing disputes, while many ex-rebels have formed powerful militias rather than integrating into the regular armed forces and police.

The best way to fight the scourge of terrorism is to do it March 14 style: shield, fund, shelter and encourage them, especially when they are of non-Lebanese nationalities.