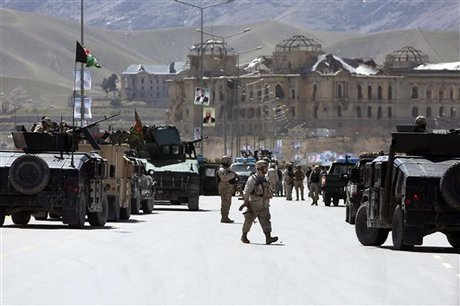 Taliban militants staged a gun and suicide attack on an Afghan election commission office in Kabul on Tuesday, killing two police officers, with less than a fortnight to go before the presidential poll.

The insurgents have vowed a campaign of violence to disrupt the ballot on April 5, urging their fighters to attack polling staff, voters and security forces in the runup to election day.

Afghan security forces battled attackers at an office of the Independent Election Commission (IEC) in the western Darulaman area of the Afghan capital for more than four hours.

"At around 11:35 am (0705 GMT) a suicide bomber blew himself up at the gate of an IEC regional office in Darulaman, and then several other attackers entered the building," Kabul police spokesman Hashmat Estanakzai said.

The attack was close to the home of Ashraf Ghani, who is seen as a frontrunner in the race to succeed President Hamid Karzai.

A member of Ghani's campaign team said the former World Bank economist was out of Kabul at the time, campaigning in the eastern province of Paktia, and Ghani said on Twitter that his family, who were in the house, were safe.

The Taliban, who have led the insurgency against Karzai's government and its foreign backers since 2001, claimed the attack in a statement on their website.

Ahmad's youngest son Abuzar, two, remained in hospital Tuesday with serious wounds suffered in the attack. His condition was showing signs of improving, according to doctors.

The Serena attack came on the same day that seven Taliban suicide attackers invaded a police station in the eastern city of Jalalabad, killing 10 policemen.

And last Tuesday, a suicide bomber killed 16 people at a crowded market in the northern province of Faryab. There was no claim of responsibility for that attack.

Previous Afghan elections have been badly marred by violence as the Islamist militants displayed their opposition to the U.S.-backed polls.

Another bloodstained election would damage claims by international donors that the expensive intervention in Afghanistan has made progress in establishing a functioning state.

U.S.-led NATO combat troops are withdrawing from the country after 13 years of fighting the Islamist insurgency, which erupted when the Taliban were ousted from power after the 9/11 attacks on the United States.

Relations between Karzai and the U.S. have been severely strained over the president's decision not to sign an agreed deal for a small U.S. force to remain in Afghanistan from 2015 on counter-terrorism and training operations.

Apart from Ghani, the other leading election candidates are Abdullah Abdullah, who came second in 2009, and former foreign minister Zalmai Rassoul.