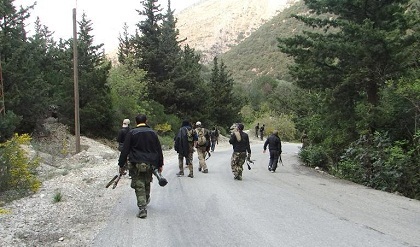 Syrian government forces intensified their shelling Wednesday of positions seized by rebels in the coastal province of Latakia, focusing on the Kasab border crossing into Turkey, an army officer said.

The province is the historic heartland of President Bashar Assad's clan and his Alawite sect of Shiite Islam, and territory the regime will not easily give up.

An Agence France Presse correspondent, who was with troops in the village of Al-Bassit, 15 kilometers (nine miles) west of Kasab, reported seeing columns of smoke rising over a mountain separating it from the border crossing.

"The army is relentlessly bombarding Kasab to stop the rebels from digging in" after capturing it on Sunday, the officer told AFP, adding that the nearby rebel-held village of Samra was also being targeted.

Omar al-Jeblawi, an activist on the ground, confirmed heavy shelling, and air strikes, near the border.

"There is a heavy bombardment of Kasab, using tanks and planes," Jeblawi told AFP by telephone.

And a rebel who identified himself only as Samer said the pounding was ferocious, but that there are "thousands of fighters ready to strike back against the army."

The officer said thousands of rebels had participated in a Friday assault on Kasab, in fighting that had killed 50 soldiers and left hundreds of rebels dead.

For its part, the Syrian Observatory for Human Rights said around 100 fighters had been killed on each side.

"And there are many regime supporters, the majority of them Alawites, who have also volunteered to fight against the rebels.

"The regime did not expect this surprise offensive on its stronghold, but it will certainly not let the rebels keep control," he added.

On Tuesday, the rebels captured a hill known as Observatory 45, which strategically overlooks opposition-held areas of Latakia.

Separately on Sunday, Turkey downed a Syrian jet that Ankara said had violated its airspace, an act that Damascus described as "a flagrant act of aggression."

On Wednesday, Turkish Foreign Minister Ahmet Davutoglu said his country was ready to take any measures, including cross-border military operations, against threats to its national security.

"The Turkish republic is a powerful state and never hesitates to take any measures to protect its national security if need be," he told AFP in an exclusive interview.

Turkey backs the revolt that broke out against Assad in March 2011, and hosts more than 750,000 Syrian refugees.

But Syria has accused Turkey of giving cover to rebels in the assault on Kasab, and the officer in Al-Bassit said a Turkish tank had even fired at a Syrian army position.

More than 146,000 people have been killed in the three-year conflict and nearly half the Syrian population has been displaced.

This is extremely significant. if they can hold on to it, then this would be the start of the decline of this murderer regime.

it s not me livving in garbage... you are, given the desperate posts you send here... seems you are sooo afraid, typical FPM coward hiding between the legs of its pimp! brave little syrian you are... but lebanese? nothing from it...

The terror party rushed 2,000 terrorists to defend the shia villages in Latikia. Many will come back in body bags for sure.

neither hizbos and nor shia villages in latakia...

Good to see the FSA-Al Qaeda jihadist terrorists destroying each other. Keep it up!

sure! M8ers just focus on insignificant details because they lack intelligence to post relevant things.... or bring a deep analysis so they insult like weak only know how and they try to look smart whatsoever but always fail and look more ridiculous by the day....

insults is the only language these failed people understand...