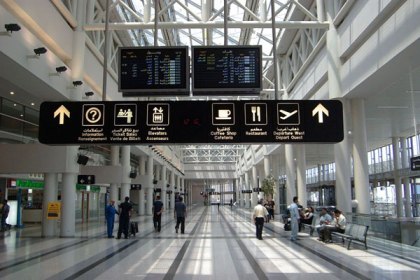 The interior ministry denied on Friday a report that a woman from an Arab country was arrested by “unofficial” security personnel and jailed at Rafik Hariri International Airport.

The denial came in response to an article published in pan-Arab daily Asharq al-Awsat this week, claiming that the woman was kept for several days in a secret jail lying several stories below the ground at the facility.

The ministry statement said that Interior Minister Nuhad al-Mashnouq personally contacted Hussein Shabakshi, the writer of the article, asking him about the identity of the woman.

But Shabakshi, an opinion writer, refused to do so claiming the woman did not want to be identified, the statement said.

Al-Mashnouq told him that the article was not the appropriate way to deal with such a sensitive case, it said.

Shabakshi has alleged that Hizbullah members maintained a prison two stories below the ground in which they detained, interrogated and tortured people.

He said the woman, who was traveling from Beirut to Jeddah in Saudi Arabia, was held by Hizbullah for 72 hours for questioning.

Shabakshi also claimed that the woman heard the screams of other people being tortured in prison cells in the same location.

Al-Mashnouq “asked the General Security and Internal Security Forces directorates, and airport security to immediately open an investigation into the incident … and inform the public opinion about their conclusions as soon as possible,” the ministry said.

“It has been revealed so far that the information published in the newspaper is not true,” the statement added.

Al-Mashnouq urged the daily to be accurate in publishing such information, particularly that the article did not mention any names or did not give a date as to when the alleged incident took place.

“The interior ministry and its agencies were and still are ready to assume full responsibility in following up the case, unveil all its details and take the legal measures if it was revealed that there were perpetrators,” the statement said.

It would not surprise anyone if the article is true. The terror party controls the airport and the General Security as well.

@popeye
Only brainless people like you whose vision is blinded by bigotry and hatred would not be surprised at such ridiculous calumniations.

Maybe Joseph Sader is "residing" at the airport after all these years...

If Naharnet can issue and article such as this without investigative journalism to confirm it than Naharnet is not worthy of being a news source............
You are so right josephani, you are wassting your time here. Bye, you will be missed.

I believe it too. The airport is part of Iran and is a bad example for Lebanon

MEA is not controlling the airport and u know it, it's the DGCA...
Brigadier General Wafiq Choucair is an iranian lackey...

don t worry cedre... the chiwawa ft would do anything to twist the truth to make it look like he wants it to be and deny his friends are involved in anything fishy or illegal! LOL

Indeed it's maybe one of the most unpleasant places in Lebanon, with unnice amin l 3am staff. An unforgetable humiliation for tourists who visit the country.

Why read comics when one can read articles like this on naharnet :) love the part where she heard screams, just some added shock effect by the ever hard working, fact finding op-ed writer.

Bani Maarouf, as always, you will always find a way to insult people. Josephani is entitled to his free views and nothing gives you the right to derogate him in any way. No wonder when you post, you will get debased so often. But I have never doubted that you will hardly ever grow, it's a pity, for you though since you are a known quantity, so little to do with qualitative values.

This airport is a disgusting and stressfull place, the amin al 3am looks like old fashioned fascists with their old badly cut uniforms, their unkindness and the way they treat foreigners.

You really don't feel welcomed to Lebanon when you get there. And most of the time they open your bags with no respect (leaving it open, etc.)
I wished I could enter Lebanon from another gateway. Filthy Hizbullah controled airport. Of course they torture inside it. Just look the way they welcome people: so unnice and unpleasant.

What does Iran care about the reputation of Lebanon and its civil institutions?