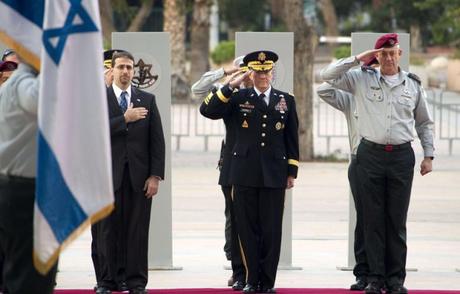 The chairman of the U.S. joint chiefs of staff is heading to Israel for talks on mutual strategic interests after Israel's defense minister upset Washington with remarks criticizing U.S. foreign policy.

"General Martin Dempsey will be departing this weekend for a visit to Israel," an Israeli military statement said.

The focus of discussions with his Israeli counterparts "will be on issues of mutual strategic interest, while continuing to build on this important defense relationship," it said.

"In Israel, the chairman will meet with the Israel Defense Forces as part of the United States' unwavering commitment to Israel's security, and will discuss issues of strategic importance."

"There was in my comments no criticism or intention to offend the United States," Yaalon's office quoted him as telling his U.S. counterpart.

"We are disappointed with the lack of an apology for Defense Minister Yaalon's comments," she said.