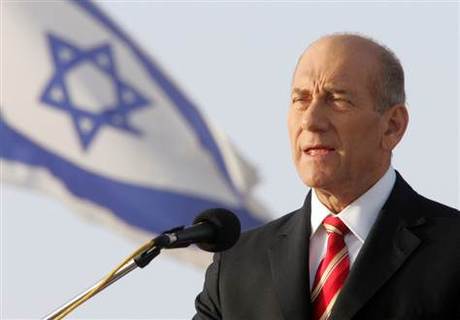 The ruling marks the first time a former Israeli premier has been convicted of bribery in what has been called one of the worst corruption scandals in Israeli history.

According to public Channel 1 television, Olmert was convicted of receiving bribes in two separate cases, one of which was linked to construction of Jerusalem's massive Holyland residential complex dating from when he was the city's mayor.

Olmert was in 2010 named as the key suspect in the so-called Holyland affair on suspicion that he received bribes totaling some 1.5 million shekels ($430,000, 312,000 euros), although the prosecution later reduced the sum received by about half.

Olmert was mayor of Jerusalem from 1993 to 2003, after which he served as a cabinet minister, holding the trade and industry portfolio as well as several others, before becoming premier in 2006.

He led the center-right Kadima party into government, but resigned from the premiership in September 2008 after police recommended that he be indicted in several graft cases.

In July 2013, a Jerusalem court found Olmert guilty of breach of trust in a closely watched corruption case, but cleared him on two more serious charges related to the alleged receipt of cash-stuffed envelopes and multiple billing for trips abroad.

He was fined $19,000 and given a suspended jail sentence for graft.

The conviction related to favors that Olmert granted a former colleague while serving as the trade and industry minister.

At least in Israel and the civilized world, officials are put on trial and are accountable for their actions to the people. In Lebanon, the terror party roams freely, kills people in Lebanon and Syria, starts wars, destroys the country, syphons off its resources and assets, manages every conceivable illegal activity from car theft to drugs, and it HOLDS the state responsible and accuses the state of failing to provide its citizens with decent life.

What we know is that you and the rest of the M8 cheerleaders are Assad/Iranian slaves and you are happy to have the Axis militia occupying Lebanon.

I think you missed the whole point the guy is trying to make... Even our common enemy the Zionist state has better civilization than we do as far as accountability of politicians while ours from both sides serve themselves, steal from the public treasury and get away with it!

Not every time someone doesn't agree with you, means he is a traitor to his country; that way of thinking has gotten old... Grow up

Is that why Nasrallah always puckers his lips when he talks about Assad or the Ayatollah?

Also, this is pitiful in light of all the crimes the apartheid rogue-pseudostate is responsible for.

What a loser ! Lebanese politicians receive millions in bribes !

I thought Hezbollah "beat" Israel ? oh no they didn't ...