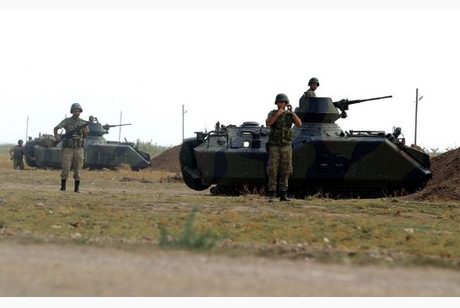 Turkey has fired artillery into Syria to retaliate after a cross-border rocket from the war-torn country had slammed into a mosque, Turkish media said Monday amid heightened tensions.

"In accordance with our new military engagement rules, our artillery units on the border fired into Syria in response," Hatay officials were quoted saying in a statement.

Turkey, a staunch opponent of the regime in Damascus, hosts more than 750,000 refugees from the three-year-old Syrian conflict, many of them in camps along the border.

The military along Turkey's Syria border often retaliates when munitions from fighting there hit its territory.

Turkey's Prime Minister Recep Tayyip Erdogan, in a late-night speech after his party scored a landslide victory in Sunday local polls, said "Syria is currently in a state of war against us."

A week before Erdogan spoke, Turkey said its own F-16 aircraft had shot down a Syrian fighter jet for a breach of Turkish airspace as it was on a mission to bombard rebels near the border.

Turkey toughened its rules of engagement after the downing of one of its fighter jets by the Syrian air force in June 2012, warning that any military approach of the Turkish border from Syria would be considered a threat.