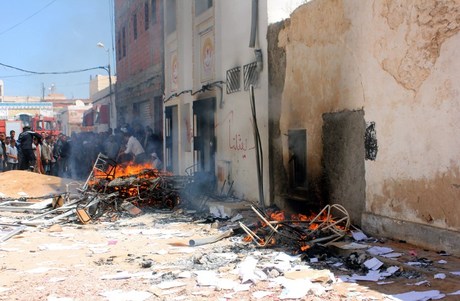 Protesters on Wednesday ransacked the offices of Tunisia's main workers' union in the tense town of Ben Guerdane for not backing a strike demanding the reopening of the Libyan border crossing.

Frustration has been growing in Ben Guerdane at Tripoli's decision to shut the nearby border post in early March in a bid to stem the trade in smuggled Libyan petrol, on which the local economy depends.

Like many other parts of Tunisia, the southern town suffers from persistent unemployment and lack of opportunity, driving factors behind the 2011 revolution that toppled a decades-old dictatorship.

Dozens of youths stormed the UGTT headquarters, throwing documents and furniture into the road and setting them on fire, while also torching equipment inside the building, an Agence France Presse photographer said.

Witnesses said the assailants fled when the police arrived.

The UGTT condemned the "orchestrated aggression," saying it had warned the authorities of a possible attack and accused them of doing nothing to prevent it.

The powerful group insisted it supported the aspirations of the local population, namely "development, employment and the fair redistribution of wealth."

But it did not support an indefinite strike called on Monday by a group of residents in Ben Guerdane who are demanding the reopening of the Ras Jedir border crossing, Tunisia's main gateway to Libya.

A number of shops and schools remained closed on Wednesday.

The World Bank said in December that 20 percent of the active population in Ben Guerdane work in the contraband business, making it one of, if not the largest employer in the region.

The Tunisian government has vowed to eliminate trafficking and parallel trade, which Prime Minister Mehdi Jomaa said during a visit to the southeast last month caused "huge losses" to the economy.

Ben Guerdane was rocked by a week of clashes between police and protesters in January last year, after a similar closure of the Ras Jedir border crossing.