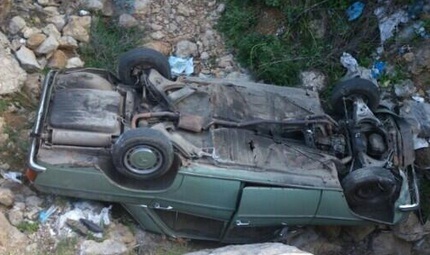 Four people were killed Thursday in two traffic accidents in the Hasbaya and Ashrafieh areas, including three members of the same family.

"A green Mercedes cab, which was being driven by Nawwaf Younis, fell off an eight-meter-high cliff on the Mimis public road in Hasbaya and landed on its roof, which resulted in the death of Nawwaf, his wife Taljeh Younis and his sister Layla,” state-run National News Agency reported.

Separately, the agency said a man was killed after being hit by a vehicle on the Elias Hrawi Highway near Sagesse University.

Tragic and unnecessary loss of life. The roads in Lebanon had to be one of the worst roads in Arabia. No safe pedestrians passing and non functional traffic signals. When they pave a road it just a cover for few years and then the potholes are everywhere. We are truly a third works country of the highest degree.

How did this happen?

Third World!??? Now, please look in the mirror.
Lebanon is the new Afgan of the world! What a dump it has become... And all thanks to you all Lebanese for keeping your secs and powers in play to allow this!