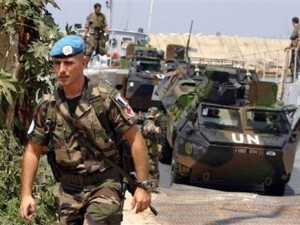 United Nations Interim Force in Lebanon spokesman Neeraj Singh said on Thursday the security situation in Southern Lebanon differs strategically from the situation in 2006 thanks to the UNIFIL.

“The UNIFIL formed a strong deterrent against any renewal of hostile attacks along with the Lebanese army efforts,” Singh told the Kuwaiti An Nahar newspaper.

He noted “the terrorist attack that targeted the French contingent in Sidon doesn’t fall in Lebanon’s best interest nor help the peace and security in the region.”

The spokesman unveiled that Italy plans to drawdown the number of its contingent in UNIFIL during the upcoming months.

However, Singh said: “More than 1,000 Italian peacekeepers will remain with the international forces; therefore, Italy will remain one of the countries that have the largest contingents in southern Lebanon.”

He stressed that the Lebanese authorities are responsible for implementing the law and order in the UNIFIL operation areas.

The daily quoted him as saying: “Challenges remain including the violation of the international resolution 1701, but the UNIFIL has an efficient mechanism to deal with them.”

UNIFIL is in the way of the 'resistence' who wishes to provoke another war in which we suffer.

They hope the UN will loose their nerve and pull out.