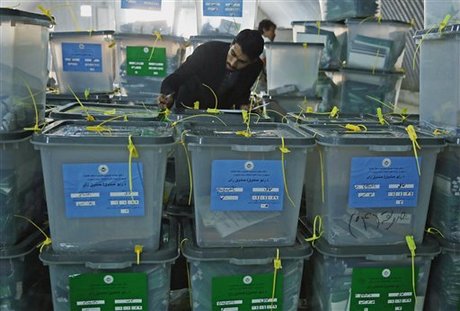 U.N. Secretary-General Ban Ki-moon congratulated Afghans on Sunday for the "momentous achievement" of their recent elections, calling for fairness and transparency as the lengthy counting process gets underway.

Afghans braved the threat of Taliban attacks to vote in Saturday's polls to elect a successor to President Hamid Karzai, the first democratic transition of power in the country.

"The millions of women and men who cast their ballots are a testament to the courage and the commitment of Afghans to exercise their rights and shape their future," said Ban.

Their participation, despite threats and intimidation, "sent a powerful message that the perpetrators of violence cannot win," the U.N. chief said.

He congratulated organizers and called on them to ensure that the final results, which could take weeks to confirm, "reflect the will of the voters."

Leading candidates in the presidential election meanwhile voiced concern that voting was tainted by fraud.

Ban asked Afghans to support electoral institutions as they work "fairly, transparently and in the interests of the Afghan people."

Any repeat of the massive fraud that soured Karzai's re-election in 2009 could undermine the winner's legitimacy as NATO combat troops leave the country.

Ban also hailed strong participation from women as a step forward in having a say in their country's future on an equal basis with Afghan men.