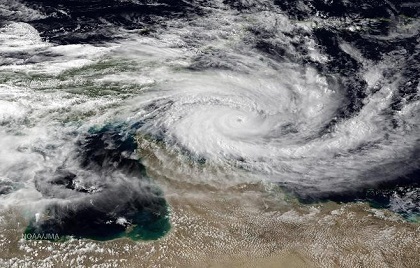 Thousands of homes were without power and residents of worst-hit Cooktown were warned clean water was about to run out as cyclone Ita rolled along Australia's Barrier Reef coast Sunday.

Downgraded from a category four to a category one storm after making landfall late Friday, Ita continued to bring heavy weather as it tracked along the coast, with roads, power and water cut and warnings of flash flooding from torrential rain.

Some 16,000 homes were without electricity and several roads were shut due to flooding, according to emergency officials. No deaths or major destruction have been reported.

In Cooktown, which bore the brunt of the storm as it barreled into the coast, water was rationed to drinking and "minimal" sanitation only, with severe shortages due to storm damage.

"Police are around patrolling now because naturally people say 'oh, we've got the water back, we'll hose off our house or driveway or whatever'. That can't happen otherwise we will run out of water this afternoon," Cook shire council CEO Steven Wilton told ABC radio.

Queensland premier Campbell Newman inspected the damage in Cooktown, where four buildings were destroyed and another 50 were damaged by the storm. Banana plantations in the region were flattened.

Elsewhere, Newman said rain had damaged up to 20 homes and another 30 had been cut off in the tourist town of Port Douglas by flooding.

"We can expect significant rainfall right down the coast. Falls of up to 300mm (12 inches) in locations. That means we are going to see significant flooding on various coastal rivers and creek systems," he said.

"It means that roads will be blocked and again I urge people -- restrict their travel to only the vital travel.

"The best way people can remain safe is to sit in their homes and wait this one out."

Newman appointed a disaster recovery coordinator to take up residence in the area for the next three months and oversee the clean-up.

Squalling winds and heavy rains lashed towns further south as Ita tracked parallel to the coast, with the weather bureau warning it would remain a "vigorous extra-tropical system" even after being downgraded from cyclone strength. That was expected to occur sometime on Tuesday.

On Sunday, rainfall of up to 400mm (16 inches) was expected in some areas, bringing flash flooding, and "abnormally high tides" were forecast with wind gusts of up to 110kph (68mph), the Bureau of Meteorology said.

Before weakening offshore, Ita had threatened to be stronger than the monster Cyclone Yasi system that tore through the region just over three years ago, ripping homes from their foundations and devastating crops.

Marine researchers said they expected extensive damage to the Great Barrier Reef's corals in Ita's path. When Yasi crossed in 2011 coral cover on exposed reefs was reduced to less than two percent.

Tropical cyclones are common in Australia's northeast and northwest during the warmer months.